Ulster and Edinburgh all set for historic encounter 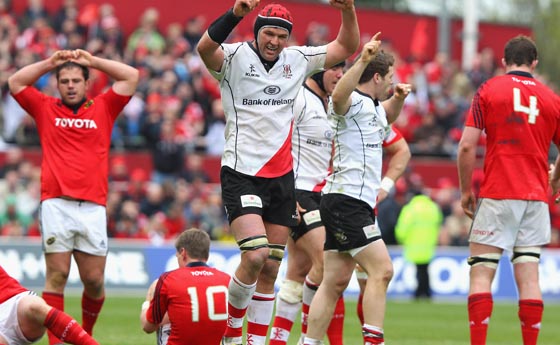 Edinburgh Rugby just keeping on creating Heineken Cup history and at the Aviva Stadium on Saturday they will become the first Scottish team to contest a Heineken Cup semi-final when they meet 1999 champions Ulster Rugby. - 26/04/2012 09:27

Edinburgh Rugby just keeping on creating Heineken Cup history and at the Aviva Stadium on Saturday they will become the first Scottish team to contest a Heineken Cup semi-final when they meet 1999 champions Ulster Rugby.

The “Scottish firsts” Michael Bradley’s team have already recorded en route to the last four include topping a Pool, earning a home quarter-final and winning a tournament quarter-final.

They are through to the last four after stunning four-time champions Toulouse with a 19-14 win at Murrayfield while Ulster Rugby won on the road when they beat Munster 22-16 at Thomond Park.

While Edinburgh are in uncharted territory for Ulster it ends a 13-year wait for another semi-final appearance and the chance to bring an end to constant references to 1999.

A prestigious place in the 17th Heineken Cup Final at Twickenham Stadium on Saturday, May 19 is at stake against the winner of the Bordeaux semi-final between defending champions Leinster Rugby and ASM Clermont Auvergne.

Former Springboks Ruan Pienaar, Pedrie Wannenburg and club captain Johann Muller have played major roles in Ulster’s return to the prestigious semi-finals but young Irish stars like Craig Gilroy have also taken the chance to shine among the elite of European club rugby.

The goal-kicking form of Pienaar – 54 points so far this season – and Edinburgh captain Greig Laidlaw (82 points) could be decisive in such an evenly balanced contest with the breakdown also a critical area of the game.

Flanker Stephen Ferris will be in the thick of things there for Ulster while Edinburgh’s Fijian No 8 Netani Talei picked up three Heineken Man of the Match awards in their Pool matches.

Bradley is in his first season as head coach of the Scottish capital city club and is adamant they will be firm underdogs at the home of Irish rugby although the teams know almost all there is to know about each other as annual Pro12 opponents.

On the European stage they have met four times in the Heineken Cup, the score there 2-1 to Ulster with one draw.

The one thing already assured is that a Celtic team will be at Twickenham for the showpiece final next month. 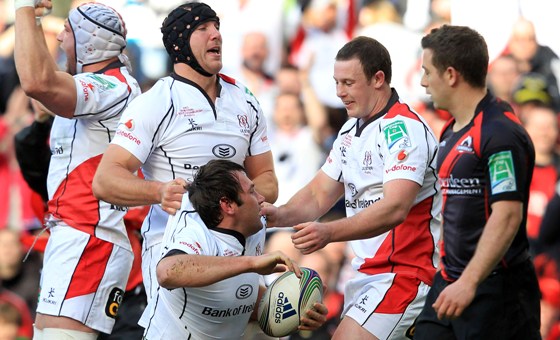 It was lucky 13 for Ulster Rugby as they qualified for their second Heineken Cup final – 13 years after they last contested European club rugby’s showpiece occasion.

The 1999 champions of Europe had South African scrum half Ruan Pienaar to thank for ending that 13-year wait as he contributed 17 of their points with a magnificent and immaculate display of goal kicking in a 22-19 win over Edinburgh Rugby at the Aviva Stadium.

Pienaar was the runaway winner of the Heineken Man-of-the-Match award with all their points coming from Springboks with No 8 Pedrie Wannenburg forcing his way over for a try from a close range scrum.

It was heartbreak for Edinburgh on their debut appearance in the tournament’s semi-final stage with captain Greig Laidlaw kicking 14 of their points as nerves took its toll when they created a number of promising attacks.

Ulster now wait to see if it will be Irish or French opponents they face at Twickenham Stadium on Saturday 19 May with the second semi-final taking place in Bordeaux between ASM Clermont Auvergne and defending champions Leinster Rugby.

The first half of this first semi-final was a pretty tense affair but with both sides making every effort to play positive rugby, there was also much to admire although Edinburgh were unable to make the most of the chances they created with some multi-phase play.

With what seemed like most of Belfast having decamped to Dublin for the huge occasion their fans were the first given something to cheer about – Pienaar landing a sixth minute penalty goal and adding another shortly before the break.

His second came when Ulster were down to 14 men with Stefan Terblanche in the sin bin after being shown yellow for a punch.

However, Edinburgh failed to score while they had the man advantage but a third Laidlaw penalty with the final action of the half made it 13-9 to the Ulstermen – thanks to scoring the only try of the half. It came courtesy of Ulster’s pack power at a close range scrum, Wannenburg storming over and Pienaar converting.

The boot again held sway early in the second period, Laidlaw reducing the deficit to a single point with his fourth penalty, and Ulster could find no way through despite their pack pounding away relentlessly at the Scottish line.

It came as little surprise when Ulster reverted to Pienaar’s boot as he landed his third penalty for the 1999 champions of Europe to go four points clear – and the Springbok ace was bang on target again and again for a seven and then 10-point advantage.

Edinburgh did have the final word with a converted try from replacement Jim Thompson but Ulster had already done the damage and are on their way to Twickenham.