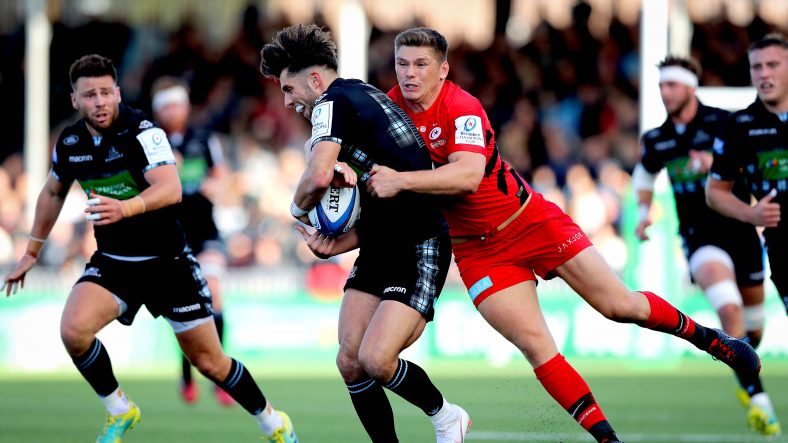 Fly-halves Adam Hastings and Owen Farrell in action earlier in the season.

Pool stage rivals Saracens and Glasgow Warriors meet for the third time this season in the Heineken Champions Cup on Saturday afternoon, live from Allianz Park on BT Sport and beIN SPORTS from 15:15 GMT.

Two-time champions Saracens were the only club to win all six matches in the pool stage, which included home and away victories against the Scottish outfit.

Training hard ahead of this weekend's trip to London ⚔️🛡️ pic.twitter.com/ObGrAwlQdC 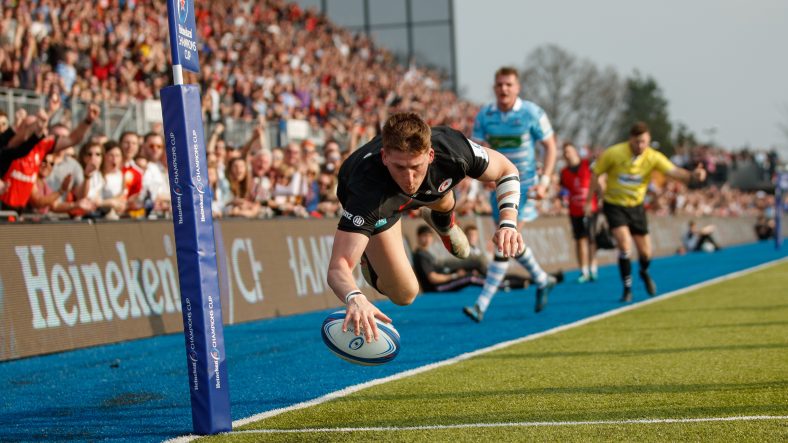 Saracens put on a sensational seven-try display to defeat Glasgow Warriors 56-27 and reach their seventh European Cup semi-final at a sold-out Allianz Park on Saturday.

Without their talisman, Owen Farrell – who was replaced prior to kick-off after his wife went into labour – the two-time champions got off to the worst possible start.

It took just two minutes for Glasgow to score the first try in north London, with the returning Stuart Hogg creating space out wide for Ali Price to dot down in front of jubilant Glasgow supporters. Fly-half Adam Hastings added the conversion.

However, it did not take long for the hosts to hit back. The versatile Alex Goode, who was filling in at fly-half, made full use of the penalty advantage to loft an up-and-under dropping underneath the posts for full-back Liam Williams to leap, collect the ball and dive over. Alex Lozowski added the extras to level the score.

Lozowski added three more points to Saracens’ total from a penalty and moments later David Strettle crossed for his first try in the corner after some excellent work from Jamie George. Lozowski failed with the conversion out wide.

However, it was not long until Saracens collected their third try of the afternoon. Captain Brad Barritt finished off a slick move, involving hooker George once more, to slide over the whitewash. His fellow centre, Lozowski, had no problem in converting his effort.

Glasgow did end the first period on a positive note, though, with Scotland international Hastings slotting over two penalty kicks to reduce Saracens’ lead to 22-13.

But the English side came out firing on all cyclinders in the second half and once Lozowski had kicked a penalty, Saracens went on the rampage with further tries.

George was once again the difference with the first Sarries try of the half, smashing his way close to the line. From the next phase, Williams registered his second try of the game when he cut an angled line to storm through the defence and touch down. Lozowski improved the try once again.

An intercept try from the 35-year-old Strettle and a powerful score by George, who was awarded Heineken Man of the Match, put the visitors out of reach, with Lozowski converting both.

Glasgow did manage to score a pair of late consolation tries either side of Nick Tompkins’ bulldozing effort for Saracens, with George Horne and Matt Fagerson crossing, and Hastings improving both.

After a performance like that, he certainly deserves to celebrate…

The England hooker is rightfully named Man of the Match 👏 pic.twitter.com/l7hcaEvG59

Reflecting on his man-of-the-match performance, George told BT Sport: “I’m really proud of the performance. There was a bit of a mix-up before the game with Owen Farrell not playing, but I’m so happy with the boys.

“I’m trying to put more pressure on myself to back up good performances and the more I do that, the more I can play at the highest level.”