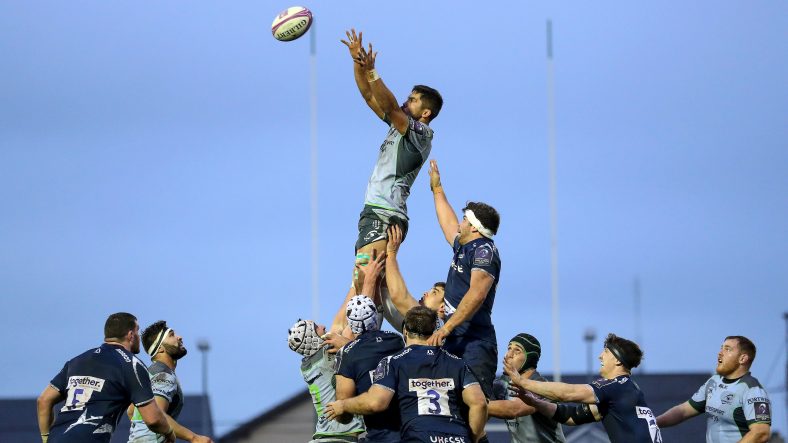 The English side won fewer matches in Pool 3, but topped the table courtesy of six bonus points as well as two victories over the Irish province. 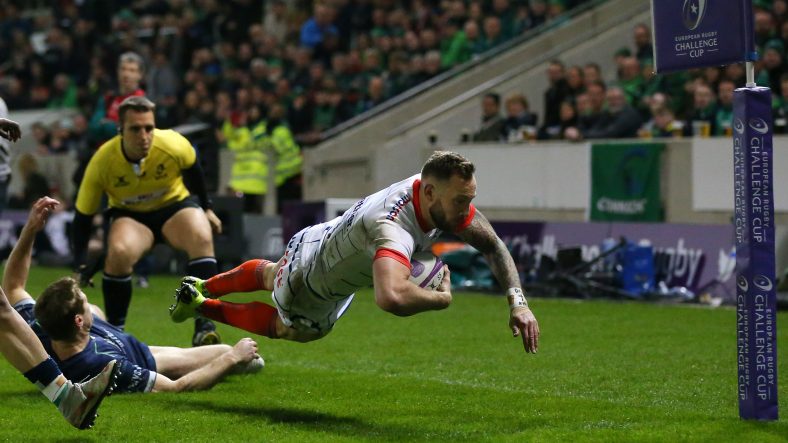 Byron McGuigan, of Sale Sharks, dives over for a try

Sale Sharks will play in a European Rugby Challenge Cup semi-final for the first time since 2008 after a convincing 20-10 victory over Connacht Rugby at the AJ Bell Stadium on Friday night.

First-half tries from wing duo Byron McGuigan and Denny Solomona did the damage, while fly-half AJ MacGinty contributed with ten points from the kicking tee.

It was Connacht fly-half Jack Carty who nearly grabbed the first try after a delightful intercept and sprint towards the try line, but Solomona reeled him in five metres short. Carty’s pass was then low at the feet of the unmarked Kyle Godwin, who could only knock on with the try line at his mercy.

The Irish province – playing in their dark blue alternate strip – won the first penalty in kickable range and Carty made no mistake from 33 metres out, putting Connacht ahead for the only time in the match.

Denny Solomona that is heroic! 🙌

Jack Carty looked certain for an intercept try under the posts…

But the @SaleSharksRugby speedster refused to give up 👊

The Connacht lead didn’t last long, as McGuigan exploited the overlap from an attacking Sale scrum, darting towards the corner after a decent set of passes to wide on the left. Against his former side, MacGinty booted over the tricky conversion.

MacGinty then set up a second Sale try as his floated pass found Solomona, who walked over the try line in the opposite corner to the opening score.

Connacht continued to struggle to get back onside, with every quick phase initiated by Sale scrum-half and man of the tatch Faf de Klerk. That meant MacGinty could add to his growing tally, with two penalty goals from in front of the posts before the interval.

What a pass from AJ MacGinty 😍

It took 27 minutes before the visitors managed to score the first points of the second half despite dominating territory and possession. That came through centre Godwin, who jinked past the the final Sale defender after a powerful Connacht scrum inside the opposition 22.

Stand-in kicker Darragh Leader slotted the conversion, but they were the final points of the match as Sale held firm despite several waves of Connacht attacks.