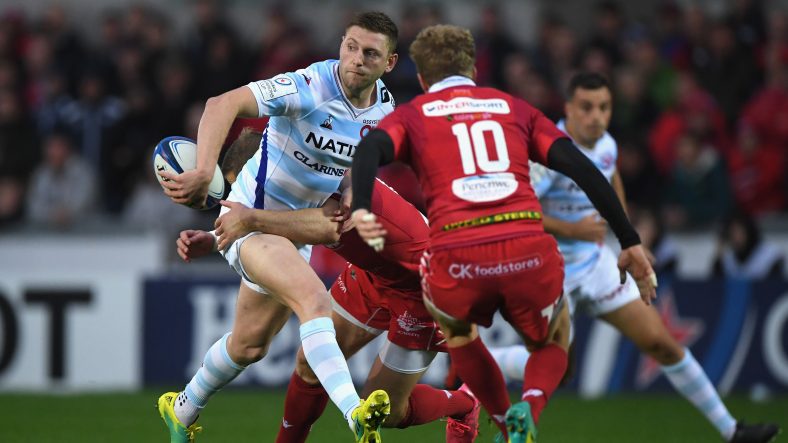 Racing 92 fly half Finn Russell offloads in the tackle of Hadleigh Parkes during the Champions Cup match between Scarlets and Racing 92 in Round 1.

Racing 92 will host Welsh region Scarlets this Saturday in search of topping Pool 4 in the Heineken Champions Cup at the Paris La Defense Arena. The Parisians currently sit on 21 points and a bonus-point win will guarantee the club a home quarter-final in March.

The match kicks off at 15:15 BST and is live on BT Sport and beIN SPORTS. 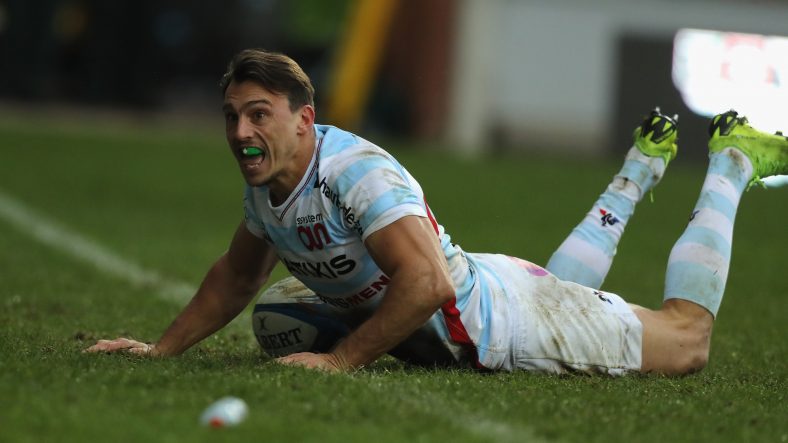 The Parisians’ bonus-point win ensured they qualify for the last eight as No. 2 seeds, while Ulster Rugby also qualify from the group.

Dan Jones’ early penalty put Scarlets ahead but it did not take long for the hosts to flow into action with Finn Russell, again at the centre of all things good for Racing, delivering a perfect grubber kick in behind for Juan Imhoff to score in the corner. Maxime Machenaud, who was on kicking duties, hit the post with his conversion attempt.

However, Scarlets responded moments later with Steff Evans storming down the left-hand wing to dot down in the corner. Dan Jones added the extra couple of points from out wide.

Then, club legend Henry Chavancy powered over on his 276th appearance for the French outfit to reduce the deficit. Machenaud made his conversion.

Fly-halves Machenaud and Jones exchanged penalties – and the lead – before the break but it was the visitors that went into half-time 16-15 ahead.

The second half continued the back-and-forth theme with Johnny McNicholl and Simon Zebo trading tries – both converted by Jones and Machenaud respectively – with Jones adding another penalty to Scarlets’ total.

Despite Scarlets’ best efforts, Fijian Virimi Vakatawa and Teddy Iribaren added Racing’s third and fourth try of the game to regain and extend their lead.

Ireland international Zebo scored his second try after collecting Finn Russell’s cross-field kick but Scarlets continued to cause Racing’s defence problems with Johnny McNicholl crossing over the try line after starting and finishing a counter-attack which took Scarlets the length of the pitch.

Replacement scrum-half Iribaren concluded proceedings with a successful penalty kick to a loud roar from the home crowd.