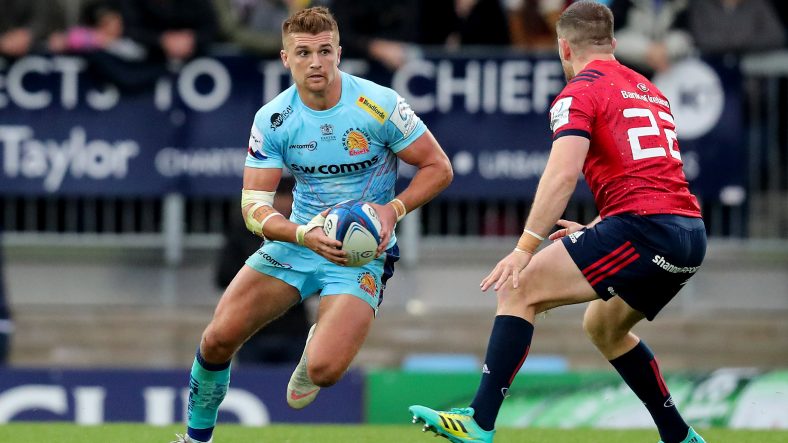 Exeter Chiefs and Castres Olympique will be hoping to kick-start their Heineken Champions Cup knockout stage prospects with a victory at Sandy Park on Sunday at 15:00 GMT. The match is live on BT Sport and beIN SPORTS. 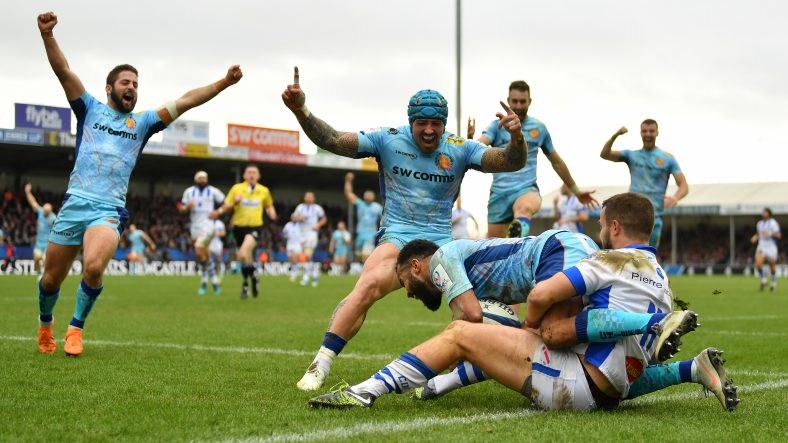 Tom O'Flaherty of Exeter Chiefs celebrates with his team mates

A superb finish from the returning Jack Nowell gave Exeter the lead inside three minutes. With penalty advantage, Nowell weaved past three Castres defenders and flew clear of the last man for the opening try of the afternoon.

Castres launched an instant response, spreading wide and forcing the overlap, finding Taylor Paris who was able to saunter over the try line.

Exeter dominated territory and possession throughout and made it count minutes later as they found Ollie Devoto who played a terrific pass under pressure to Joe Simmonds, allowing the fly-half to cross the try line with ease.

Jack Nowell, that is just superb 🙌

Your first European try, in less than four minutes? That's how you make a comeback 👊 pic.twitter.com/wCWCVKkMAB

Lock Jonny Hill then scored the third Exeter try of the afternoon after Nowell – who was named Heineken Man of the Match – got the move underway with another swashbuckling run, riding tackles and reaching the Castres 22. After a number of phases, Hill was able to power his way over the try line at the posts.

Exeter continued their dominance in the second period, with Henry Slade taking the ball 30 metres before kicking behind the Castres line. The ball took a lovely bounce for Tom O’Flaherty who caught the ball on the run and dived over for his first Heineken Champions Cup try.

"It started raining and they took me off!"

He was man of the match for @ExeterChiefs this afternoon 🙌 pic.twitter.com/ElGC88TCWK

Thomas Combezou grabbed the second try for the visitors but it was nothing more than a consolation as Slade and Luke Cowan-Dickie added further scores for the home side. Castres replacement Tudor Stroe was also sent off in the latter stages for foul play.

That win for the home side means a win against Munster in Thomond Park could be enough to send them into the quarter-finals, while Castres will host Gloucester Rugby.