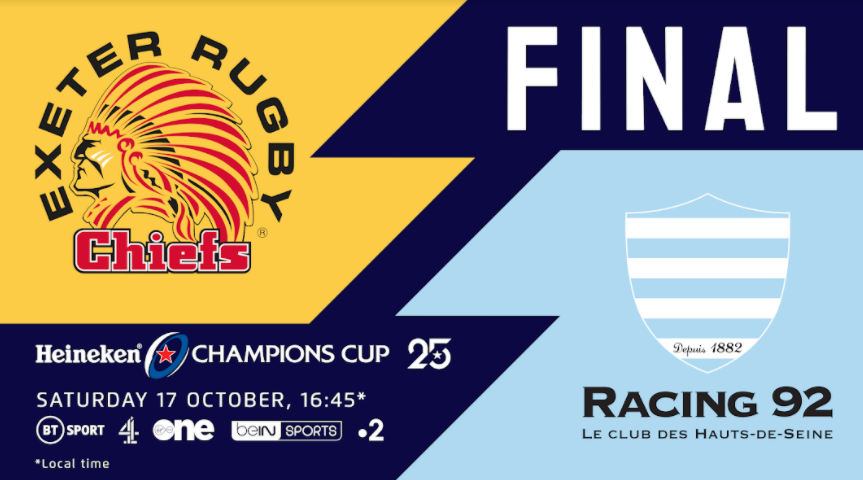 Exeter Chiefs and Racing 92 will go in search of a first Heineken Champions Cup crown on Saturday afternoon when they clash at Ashton Gate in this season’s showpiece final.

The two sides have displayed impressive form en-route to the final, with both sides topping their respective pools. Exeter then breezed past Northampton Saints in the quarter-finals before overcoming Toulouse 28-18 in a tense final four game.

Racing 92 meanwhile were made to work hard for their 36-27 win over ASM Clermont Auvergne in the last eight before earning a hard-fought victory over reigning champions Saracens in the semi-final, with EPCR European Player of the Year nominees Finn Russell and Virimi Vakatawa combining to reach Juan Imhoff for the crucial try. 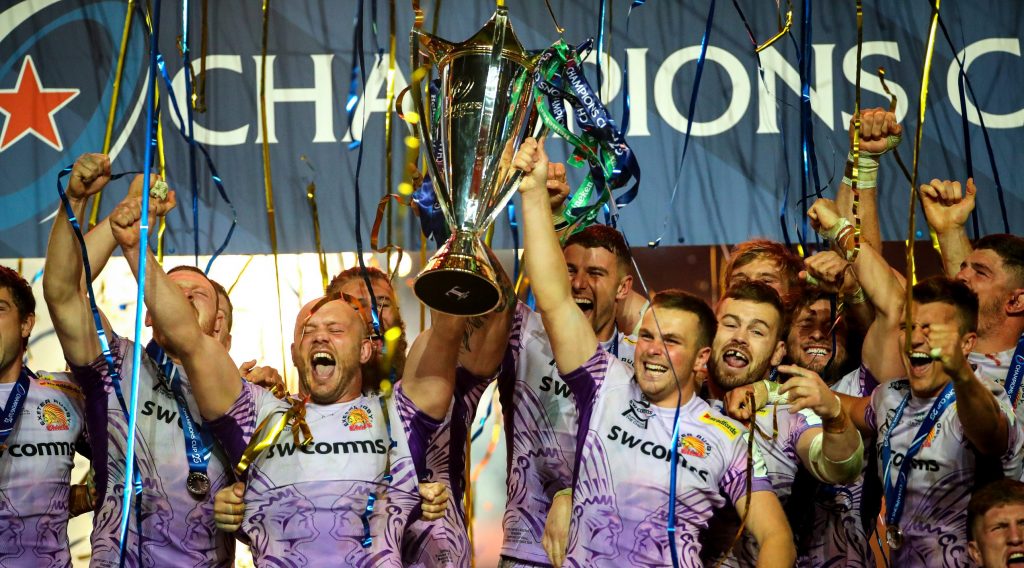 Exeter Chiefs lifted the Heineken Champions Cup for the first time after a breathtaking final at Ashton Gate, holding off Racing 92 to come out 31-27 victors in an all-time European classic.

The English side led throughout but that doesn’t tell the full story of a Heineken Champions Cup final that saw eight tries shared by the two sides, and a thrilling final ten minutes as Exeter clung on with Sam Hidalgo-Clyne coming up with a crucial turnover late on.

It was the eventual winners who made the stronger start after Teddy Iribaren missed touch early and that gave Exeter a scrum which was soon rewarded with a penalty by referee Nigel Owens.

Joe Simmonds would kick into touch and the line-out led to a driving maul that powered towards and over the line with Luke Cowan-Dickie under the pile of Exeter men.

Exeter continued to dominate and had a second try on 17 minutes when penalty after penalty inside their own 22 put Racing on the back foot and they couldn’t stop Sam Simmonds from bursting over from close range.

It's a dream start and it's just vintage @ExeterChiefs 🙌

But Racing would respond as with penalty advantage, Finn Russell forced a sumptuous pass from the centre to wide right, finding Simon Zebo who dived over in the corner.

Russell couldn’t convert but would manage to make no mistake on Racing’s second score on 33 minutes.

It was Juan Imhoff who slipped past Jonny Hill from the edge of the ruck and found enough space to go clear and score at the posts.

But after a deflected Finn Russell kick, Exeter grabbed a pivotal try just before the break.

It came from the resulting line-out, they worked phase after phase towards the posts before Harry Williams managed to power over.

Juan Imhoff spots his moment and strikes! What a game we have on our hands here!#ChampionsCupFinal pic.twitter.com/y7vwGe9YZ5

A truly remarkable second half started with Russell and Zebo combining yet again as the latter managed to dart around the Exeter defenders and have enough to strength to wriggle his way over the line for the second time.

However, Russell went from hero to villain after a loose pass inside his own half was collected by Jack Nowell and he found Henry Slade for a critical try at the posts.

Four minutes later, Racing again responded as a penalty gave them a platform to move into the Exeter 22 and they took full advantage as Camille Chat peeled off the back of a driving maul and dived over.

The conversion made it 28-24 and it would be a one-point game with 15 minutes to play when Virimi Vakatawa broke clear but Racing didn’t spot the overlap and eventually settled for a Machenaud penalty kick.

Racing piled on the pressure with a man extra in the final eight minutes as Tomas Francis was sent to the sin bin for deliberate knock-on.

But Racing opted for the corner instead of the tricky penalty kick and after over 20 bruising phases, Sam Hidalgo-Clyne came up with the crucial turnover for the Chiefs.

Exeter managed to cling on and as Racing attempted to wrestle possession back, they gave up another penalty and allowed Joe Simmonds to boot over a three-pointer with the clock in the red, giving the English side a maiden European success.