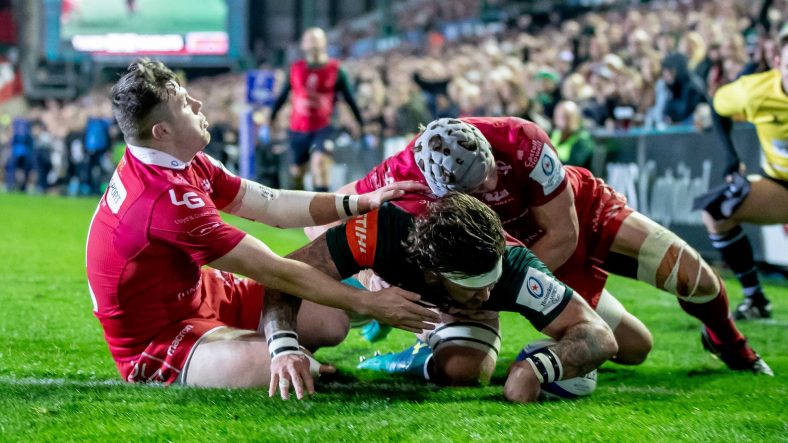 Guy Thompson scores a try despite the attentions of Scarlets' Steff Evans.

Leciester Tigers will be hoping to end a run of nine Champions Cup matches without success on Saturday when they travel to Llanelli to face Scarlets. The match is live from Parc y Scarlets at 17:30 GMT and is live on BT Sport.

🎥 Dan Cole looks ahead to this weekend's return to European action, away to Scarlets in Wales, in a sit down with LTTV at the club's Oval Park training ground.

Watch the full interview with Cole, including his thoughts on recents results, on LTTV 👉 https://t.co/VENUPejkRx pic.twitter.com/Aas5qkzHFR 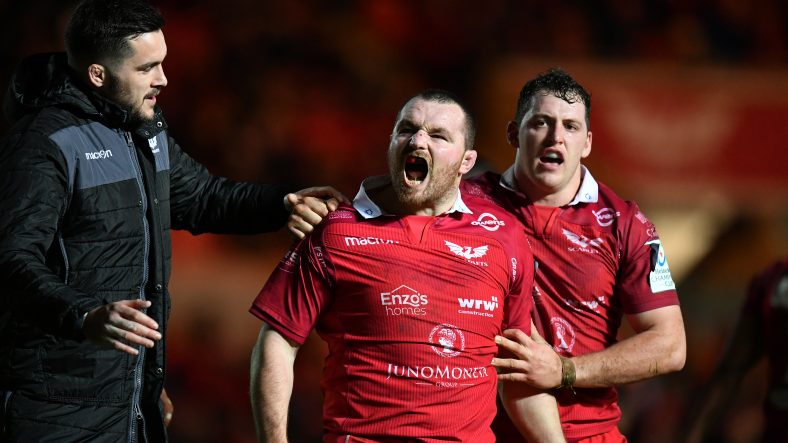 Scarlets put on a wonderful display of attacking rugby to dispatch Leicester Tigers 33-10 at the Parc y Scarlets and claim their first win in this season’s Heineken Champions Cup.

After a tedious start in Llanelli, it was the home side who put the first points on the board through prop Rob Evans after he powered over from close range. Dan Jones was wide with his conversion attempt to keep the score at 5-0.

It did not take long for another home score with captain Ken Owens, who was playing in an unfamiliar role at number eight, bulldozing his way over the line for Scarlets’ second try with Jones successful from the kicking tee.

Evans added his second try of the evening after peeling off the back of a line-maul and crossing over in the corner. Jones slotted the conversion from out wide to stretch Scarlets’ lead.

A fantastic no-look pass from Kieron Fonotia to Johnny McNicholl ensured a try-scoring bonus point for the Welsh region, with Jones continuing his fine form off the tee with a kick from out wide.

"It's showboating stuff from the Scarlets!"

Kieron Fonotia with the no look pass ❌👀

Johnny McNicholl touches down to secure the bonus point in an emphatic performance from the Welsh side 💪 pic.twitter.com/tQXaz6kGpw

Mike Williams was sent to the sin-bin for foul play after the hour mark and Scarlets took immediate advantage with wing Steff Evans scoring in the corner. Jones promoted the score with a successful kick from the touchline.

There were late tries from Will Evans and Mike Fitzgerald for Leicester but both conversion efforts were missed by replacement fly-half Joe Ford.

Scarlets will face Racing 92 in Round 6, while Leicester host Ulster Rugby at Welford Road.

Ken Owens was awarded Heineken Man of the Match by BT Sport’s Shane Williams and the Wales international said he was proud of his team’s effort at full-time.

“It’s been a pretty tough couple of weeks,” said Owens. “I told the boys to show pride and set standards in their own performance and to be fair they all put in a shift tonight. The boys grafted hard and they got their awards tonight.

“[Playing number eight] Needs must at times and you do what you can do for the team. Scott Quinnell still would have been a better option than me tonight.”