Munster looking to stay in command of Pool 2 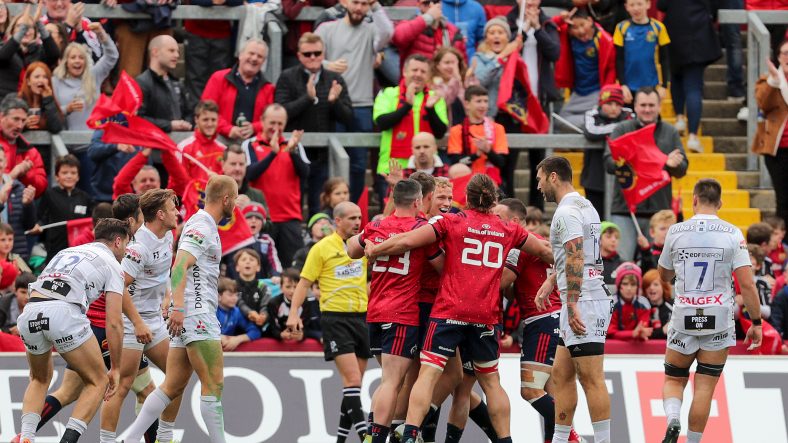 Munster Rugby can take a huge step towards the Heineken Champions Cup knockout stages on Friday night if they are able to defeat Gloucester Rugby at Kingsholm Stadium. The Pool 2 encounter is live on BT Sport from 19:45 GMT.

The visitors were penalised early on inside their own half, giving Gloucester a kickable penalty that Billy Twelvetrees would have no problem slotting between the sticks.

Lewis Ludlow then strayed offside when Munster were driving inside the Gloucester 22, giving Heineken Man of the Match Joey Carbery a simple penalty kick to level the scores and they would go further in front minutes later.

Munster piled on the pressure after a string of phases, with Conor Murray eventually finding his half-back partner Carbery for the first try of the evening at the posts. The try-scorer duly converted his score.

Seconds later, Munster won another penalty in kicking range and that man Carbery again was able to drill the ball between the sticks in what was a near-perfect display.

After 20+ phases with the clock in the Red, Munster land a hammer blow!

Rory Scannell caps off a great first half for the visitors 👊 pic.twitter.com/sfn8nHc4es

With the clock deep in the red at the end of the first half and over 25 phases played, Munster secured a second try. It was a continuous wave of blue heading towards the Gloucester line and Rory Scannell eventually bounced off his man and dived over for a crucial score.

Munster came out in similar form at the start of the second half but it was Gloucester that grabbed the first points of the second period.

Over 35 phases from the forwards allowed Danny Cipriani to spread the ball wide, reaching Ollie Thorley who sprinted to the corner for the first Gloucester try, that wasn’t converted by Twelvetrees who hit the post.

Joey Carbery is the man of the moment 👏

A devastating couple of minutes! pic.twitter.com/M8IFep63PG

That was as good as it got for Gloucester – despite a Fraser Balmain consolation try – who were overwhelmed for the remainder of the second half.

A Billy Holland offload allowed Keith Earls the chance to dot down at the corner, while Carbery would then set up a try for Andrew Conway and score one of his own after a delightful intercept inside his own half, bringing up the crucial bonus point.

Munster – who sit top of Pool 2 with 17 points – host Exeter Chiefs in Round 6 while Gloucester will travel to face Castres Olympique.