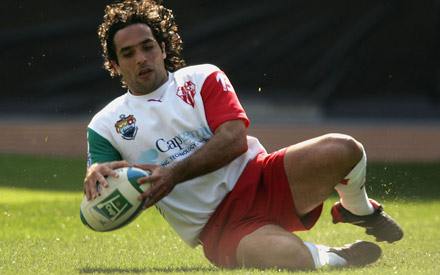 Biarritz Olympique completed a “magnifique” weekend for France by becoming their country’s third qualifiers for the semi-finals of the 2005 Heineken Cup.
Centre Martin Gaitan scored the crucial try while international scrum-half Dimitri Yachvili booted 14 points as they held out to beat Munster 19-10 at San Sebastien.
But they had to survive a courageous second-half fightback by the Irish giants before booking their place in an all-French semi-final against Stade Francais Paris.
Trailing 16-10 at the break, Munster pulled out all the stops and after Shaun Payne had been dragged down inches short of the line, flanker David Wallace charged over from the back of the resulting scrum.
Yet despite a barrage of pressure from Munster, roared on by an army of supporters who had made the journey to Spain in their thousands, Biarritz’s defence held firm.
It was a lapse of concentration as early as the 15th minute that ultimately saw Munster, twice finalists, miss out on a place in the last four for the first time in six years.
Wing John Kelly failed to take a pass as Munster looked to attack from their own territory. Outside-half Paul Burke, in for the injured Ronan O’Gara, was then caught deep inside his own half trying to salvage the situation and Damien Traille robbed possession for fellow centre Gaitan to score in the corner.
Munster were then forced to play catch-up rugby and despite Wallace’s try, and the considerable efforts of prop Marcus Horan and lock Paul O’Connell, Yachvili used his boot to keep his side just out of reach and take his team their second successive Heineken Cup semi-final.