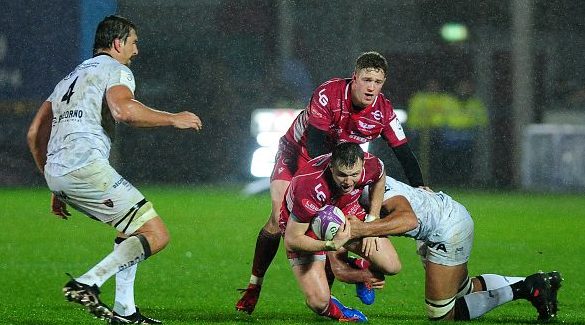 Steffan Hughes, of Scarlets, is tackled by Swan Rebbadj, of RC Toulon

Three-time European champions RC Toulon and Scarlets have been familiar foes recently, with their Challenge Cup quarter-final at Stade Félix Mayol tie on Saturday evening (20:15 UK and Irish time) being their fifth meeting in three seasons.

Toulon won all six of their pool stage matches to earn the number one ranking, including home-and-away victories over their west Wales opponents, whose fans will have access to Welsh-language coverage courtesy of S4C. The tie is on FR4, BT Sport and beIN SPORTS too.

• RC Toulon have won seven of their nine matches against the Scarlets in European competition (L2), including each of their three Challenge Cup contests.

• Four of the last five meetings between the clubs have been decided by three points or fewer.

• Toulon and Scarlets have met in the quarter-finals of the Challenge Cup once before, in 2010, when the TOP 14 club won 38-12. Overall, Toulon have won two of their three matches at this stage of the competition, while Scarlets have lost both their fixtures in the last eight.

• Toulon have won 11 of their last 12 Challenge Cup games, including their last six in a row, their best run in the competition. The only defeat in that sequence was the 2012 final, when they lost to Biarritz.

• Toulon recorded the best tackle success rate of any side in the pool stage, completing 88% of their 896 attempted tackles.

• Scarlets were one of just two clubs not to receive a yellow card in the pool stage (also Edinburgh), although they are one of seven clubs to have had a player sent off.

• Scarlets’ Uzair Cassiem has made the second most carries this season (69), with only Enisei-STM’s Mikheil Gachechiladze making more (86).

• Toulon’s Baptiste Serin has made seven try assists, two more than any other player and five more than any Scarlets player (Dan Jones 2).

• Scarlets wing Steff Evans has made 11 offloads, the most of any back and the joint most of any player overall.

RC Toulon come from behind to seal semi-final spot 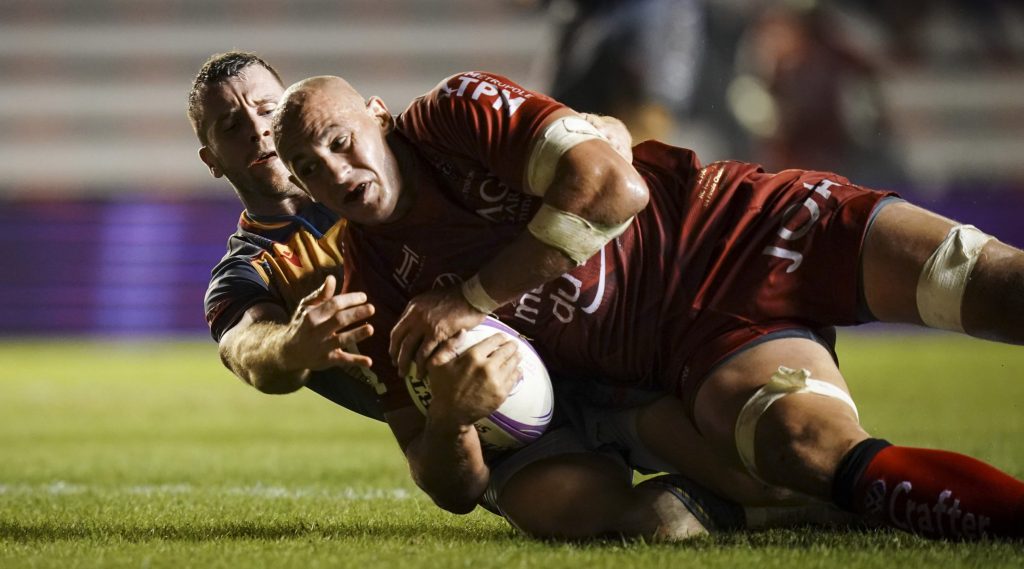 An inspired second-half performance from Louis Carbonel gave Toulon the comeback win 11-6 against Scarlets – and a place in the Challenge Cup semi-finals against Leicester Tigers.

The result also means that Toulon maintain their 100 per cent record against Scarlets in this competition.

The boot of Leigh Halfpenny had given Scarlets the half-time lead courtesy of two penalties, with Toulon left to rue their missed chances. The hosts had thought they had crossed the line courtesy of Sergio Parisse, but television replays confirmed a forward pass in the build-up.

And although Baptiste Serin had an opportunity to halve the lead before the break, he missed his penalty from 22 yards.

But Toulon turned things around in the second half. Carbonel replaced Serin three minutes in, and his kicking made inroads into the deficit before his pace launched the move that resulted in Parisse finally getting the ball over.

The Italian scores the first try of the game as Toulon take the lead!

Scarlets continued to push hard in the closing stages, with Steff Evans making a wonderful run through the centre before a last-ditch tackle prevented his progress.

And debutant Tyler Morgan had a fine chance, but spilt the ball just as he got over the line.