Heineken Champions Cup Pool 2 will be decided on Saturday when Munster Rugby and Exeter Chiefs clash in a crucial match at Thomond Park. The encounter in Limerick gets under way at 17:30 GMT and is live on Channel 4 and Virgin Media as well as BT Sport.

And @scannell_rory12 knows it could be all or nothing for the 🇮🇪 province 👇https://t.co/utLHkTa7LN pic.twitter.com/UIp2qQfgFi 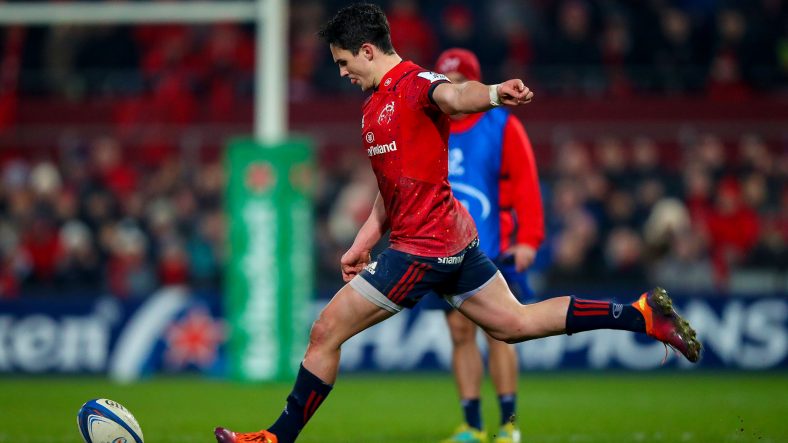 Fly-half Joey Carbery kicked all nine points in Munster Rugby’s compelling victory over Exeter Chiefs to send the Limerick-based club into the Heineken Champions Cup quarter-finals for the 18th time.

The 9-7 success at Thomond Park means the Irish province top Pool 2 and are the sole qualifiers from the group. They will be seeded either fourth or fifth depending on Sunday’s results.

The atmosphere inside the stadium was ferocious from the very start and it was Carbery who scored the first points of the evening with a successful penalty kick in the sixth minute.

Exeter Chiefs forced their way back into the contest to score the only try of the match with their trademark line-out maul, with back-rower Don Armand the scorer. Joe Simmonds made his conversion.

Ireland international Carbery then reduced the deficit to 7-6 before the break as Munster’s defence remained resolute, with Heineken Man of the Match Tadhg Beirne a stand-out performer.

The second half was as gritty as the first, with both team’s displaying mammoth defensive efforts and ensuring nothing got through.

However, it was Carbery once again, a week on from his 26-point masterclass in Gloucester, who put his side into the lead, after calmly slotting his penalty kick in the 75th minute.

Exeter, now needing two scores to progress from the group, were unable to respond as Munster held on for a memorable victory.