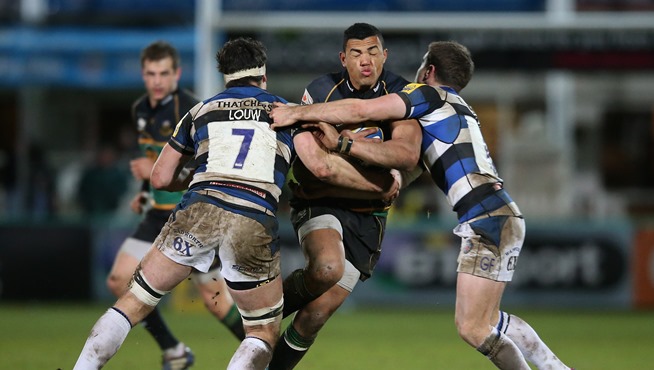 Bath Rugby will go head-to-head with English rivals Northampton Saints on Friday night for the right to lift the Amlin Challenge Cup.

It will be the first time a final of such magnitude will be played on an artificial surface, at the newly renamed BT Sport Cardiff Arms Park.

The finalists have a rich European history, having both clinched glory in the Amlin Challenge Cup and Heineken Cup in past seasons.

Bath will be hoping to repeat the feat of 2008 when they overcame another domestic rival, Worcester Warriors, 24-16 at Gloucester’s Kingsholm Stadium in what remains their most-recent trophy-winning campaign. They won the Heineken Cup by beating Brive in Bordeaux back in 1998 but have since had more success in the second-tier tournament – as they look toward their fourth final in 11 years.

The Amlin Challenge Cup moved from The Rec to Franklin’s Gardens in 2009 as Northampton beat French side Bourgoin 15-3 at the Twickenham Stoop. Saints have mainly featured in the Heineken Cup, however, having won the tournament in 2000 and finished runners up in 2011 after Leinster fought-back to triumph at the Millennium Stadium.

The two sides have plotted contrasting routes to the final, with Bath starting off in the Amlin Challenge Cup and maintaining a 100% winning record throughout the competition, succeeding in all six of their Pool 2 matches against Bordeaux-Begles, Rugby Mogliano and Newport Gwent Dragons. They went on to defeat Brive in the quarter-finals and then battled past London Wasps in their away semi-final tie when hooker Rob Webber crossed twice to help his side to a 24-18 victory.

They reached the Amlin Challenge Cup quarters courtesy of the third-best runners spot in the Heineken Cup and they then won 28-14 away at Sale Sharks before taking on yet another Premiership counterpart in Harlequins. Amlin Man of the Match Kahn Fotuali’i added to Tom Collins’ score in the semis as they edged home 18-10 in the East Midlands.

Talismanic flanker Francois Louw returns in the back row for Bath and will line-up alongside the club’s player of the year, Leroy Houston, and the in-form Carl Fearns. Full-back Nick Abendanon will make his final appearance in the blue, black and white before his summer switch to Heineken Cup semi-finalists ASM Clermont Auvergne.

Northampton welcome back British & Irish Lions prop Alex Corbisiero for his first start since a six-month layoff with a knee injury in one of five changes from the side that beat Leicester Tigers 21-20 last weekend. Lee Dickson wears the No9 shirt, with Fotuali’i dropping to the replacements’ bench, while Ken Pisi takes his place on the right wing, Calum Clark starts instead of Phil Dowson and Tom Mercey comes in for the suspended Salesi Ma’afu at tighthead prop. Club captain Dylan Hartley hasn’t recovered from a shoulder in time to take his place in the matchday 23. 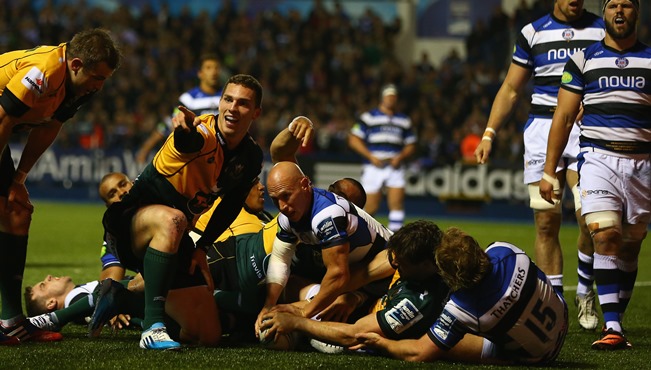 Northampton Saints kicked off a huge weekend of European rugby by claiming their second Amlin Challenge Cup crown in Cardiff thanks to a thrilling win over Bath Rugby at the Arms Park.

Saints trailed 13-6 at the break but a stunning second-half display saw Phil Dowson and Ben Foden touch down to hand the 2009 tournament winners a 30-16 victory over their domestic rivals.

Anthony Watson’s breakaway try had put Bath in control at the interval but the otherwise impressive George Ford endured an off-night from the tee, while opposite number Stephen Myler claimed the Amlin Man of the Match award with a 20-point haul courtesy of six penalties and a conversion.

Victory was Saints’ first in four continental and domestic finals in as many years, while Bath’s six-season wait for silverware goes on as their eight-game winning run in the competition came to a heart-breaking end.

Ford gave no indication of the disappointing show from the tee that would follow when he opened the scoring for Bath from halfway with less than two minutes on the clock but Saints were soon level when Myler struck from close-range four minutes later.

A burst of pace and clever chip and chase from Nick Abendanon threatened to put Saints in trouble just before the 10-minute mark but Jim Mallinder’s men cleaned up well, only to see Bath pile on the pressure moments later when Ford found a sensational touch from a penalty on his own 10-metre line.

Bath hoped they had the opening try as Dave Atwood secured the resulting lineout just six metres out and the rest of the pack drove towards the line. But referee Jerome Garces called for the TMO and fellow Frenchman Eric Gauzins ruled that Springbok flanker Francois Louw had been held up just short on his return from an ankle injury.

Ford nudged Bath back in front with Garces already playing advantage with 13 minutes on the clock and the youngster continued to pepper the Saints defence with his boot, but it was Saints who came closest to scoring next as the momentum suddenly swung their way.

A fine clearance from Foden following Abendanon’s misjudged up and under put Bath on the back foot as the game entered the second quarter and Foden was on hand to pick up possession when Bath looked the keep the ball alive in dangerous territory. Abendanon initially did well to tidy up as the ball was then hacked through but his loose pop pass was picked off by Lee Dickson and the England scrum half came within a metre of scoring.

Saints eventually had to settle for three more points from Myler with 23 minutes played but Bath took full advantage of a similar scenario three minutes later when Watson crossed for the only try of the half. This time it was Foden who was caught in possession after superb work from Jonathan Joseph, with Watson the quickest to react when the ball came loose. The 21-year-old former London Irish flyer had a free run to the line as the noise levels went up a notch in the Welsh capital and Bath were suddenly 13-6 to the good when Ford sent over the simple extras.

Bath’s lead should have been even greater at the break but Ford missed for the first time from the tee with 30 seconds left after Tom Wood had been penalised for pushing Louw as Bath broke from deep and David Wilson made vital yards. Ford pulled his kick from 30 metres out and 10 metres in from the left touchline to ensure Saints’ deficit stayed at seven points at the end of an entertaining opening 40 minutes.

Northampton would have wanted a fast start after the interval but they soon found themselves down to 14 men after British & Irish Lions prop Alex Corbisiero was yellow carded for battering into Stuart Hooper when he wasn’t part of a maul deep in Saints territory.

Ford pushed the straightforward penalty attempt well wide of the far post from the 15-metre line on the left, though, and it was Saints who struck next as Myler hit the target from long-range after a huge hit from George Pisi on Abendanon seven minutes after the restart.

The gap should have been back up to seven immediately after Myler’s third penalty but Ford failed with an even easier attempt from directly in front and just 35 metres out. Ford’s third miss in a row ensured Corbisiero’s time in the sin bin ended with Saints having edged the 10-minute period 3-0 and they cut the deficit even further when Myler sent over a 45-metre penalty after Matt Garvey was pinged for holding on with 56 minutes gone.

Saints took the lead just short of the hour after Ford’s loose back-of-the-hand pass put Abendanon in trouble and the Clermont-Auvergne bound England international knocked on after a thumping hit from Ken Pisi. The Bath full back made things worse by picking up the loose ball and Myler made it 15-12 from just outside the Bath 22.

Things deteriorated even further for Ford and Abendanon when they got in each other’s way to knock on a Saints kick ahead and Myler added another three points when his pack won a penalty at the resulting scrum after 63 minutes.

Ford showed his bottle by re-finding his radar with a third penalty two minutes later but Saints were soon celebrating once more as they claimed the crucial score with nine minutes remaining. Northampton initially blew a gilt-edged opportunity to take control when replacement props Tom Mercey and Alex Waller made a mess of a two-on-one just three metres out after fine work from Kahn Fotuali’I but the pack made amends seconds later as Dowson was driven over from close-range.

With Bath prop Anthony Perenise in the sin bin, Myler’s seventh successful strike from seven attempts put Saints more than a converted score ahead at 25-16 and Foden ended the contest with five minutes to go after Myler intercepted as Bath looked to find a way back into the game. Luther Burrell seemed to have passed up the opportunity to score as he slipped and was then held up over the line but Foden took the ball out of his grasp to touch down one handed.

Myler saw his perfect record with the boot ended when he pushed the extras just wide but it mattered little as Saints celebrated a famous success in Cardiff, some three seasons after they suffered Heineken Cup heartache at the hands of Leinster in 2011’s Millennium Stadium showpiece.