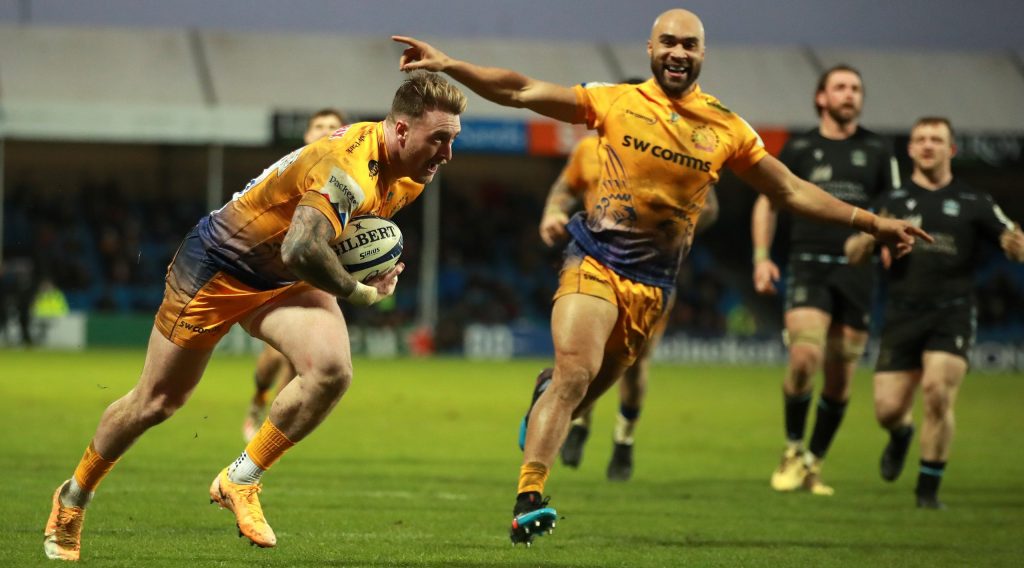 Reigning champions Exeter Chiefs got off to the perfect start in the Heineken Champions Cup, scoring six tries in a relentless performance against Glasgow Warriors.

It took Exeter just under 15 minutes to make their mark on this season’s competition, with a signature driving maul from a lineout allowing EPCR European Player of the Year Sam Simmonds to score.

A second try would come shortly after, as the Exeter pack proved their worth once again with a number of phases culminating in Jonny Gray crashing over.

Exeter were unable to register another score before halftime and went into the break with plenty of work still to do.

It was always going to happen…

Stuart Hogg comes up good for @ExeterChiefs against his old side! 💪

But Rob Baxter’s men ensured there would be no way back for Glasgow as a terrific second half performance began with Olly Woodburn breaking free to set up Stuart Hogg to score.

Exeter then secured the bonus point through captain Jack Yeandle, before a magnificent turnover from Sam Simmonds kickstarted a flowing attacking move by the hosts, ending with Olly Woodburn gathering Ollie Devoto’s perfectly-weighted kick to go over in the corner.

A final Exeter try in overtime was a fitting end for the home side as they put in an impressive display – a break from Tom O’Flaherty and some slick handling allowed Jonny Hill to power over for his side’s sixth try of the day.

"Hey Siri, show me an example of the perfect tackle."

The Chiefs were good value for their win, and restricted Glasgow to few attacking opportunities, with a missed penalty by Pete Horne in the opening exchanges being the only occasion the visitors threatened to get on the scoreboard.

Exeter travel to four-time champions Toulouse in Round 2 of the Heineken Champions Cup next week, while Glasgow host Lyon.