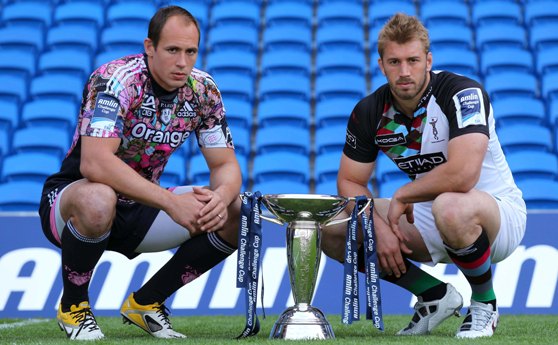 It is all to play for in Cardiff tomorrow evening when Harlequins and Stade Francais meet in the final of the Amlin Challenge Cup. - 19/05/2011 17:30

It is all to play for in Cardiff tomorrow evening when Harlequins and Stade Francais meet in the final of the Amlin Challenge Cup.

As well as a European trophy, a place in next season’s Heineken Cup is also on offer for the two sides, who will kick off a spectacular weekend of European action in the Welsh capital.

For the first time the Amlin Challenge Cup and the Heineken Cup Finals are being played in the same city on the same weekend.

Neither Harlequins or Stade qualified for next season’s Heineken Cup through their respective domestic leagues so this is their final opportunity for a place in the compeititon.

It is quite remarkable that a club with the history of Stade Francais are still in search of their first European title.

In their previous two seasons in the Amlin Challenge Cup, the French side have made it through to the knock-out stages on each occasion but this is there first Amlin final.

They made it through the Pool stage this season unbeaten and brushed aside compatriots Montpellier and Clermont Auvergne in the quarter and semi-finals respectively.

There are some exciting match-ups on display at the Cardiff City Stadium with Sergio Parisse lining up against England number eight Nick Evans.  English duo Tom Palmer and James Haskell have also both been included in Stade’s side.

Harlequins are looking for a third Amlin title after previous success in the tournament in 2001 and 2004.

They began their campaign this year with defeat away to Bayonne but fought back to control Pool 1 and then beat former European Champions London Wasps and Munster on route to the Final. 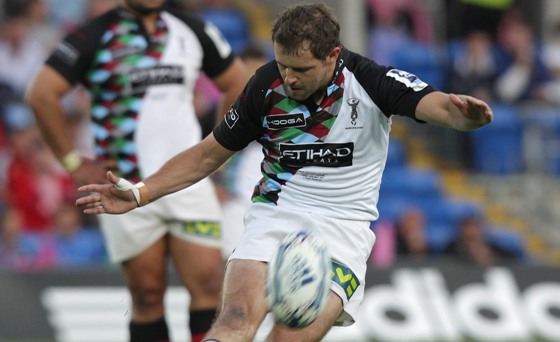 A try three minutes from time from Gonzalo Camacho clinched victory for the English side to the delighted of their travelling supporters.

A passionate opening quarter at the Cardiff City Stadium was dominated by the two fly-halves.

Nick Evans opened the scoring for his side with a penalty after six minutes before Stade’s Lionel Beauxis levelled the scores with a 50-yard kick of his own.

A bulldozing run from Samoan back-row Maurie Fa’asavalu’s set up field position for Evans’ second shot, which he again converted as Quins regained the lead.

Evans and Beauxis exchanged further penalties before the break, but it was the English side that went into half-time 9 v 6 ahead.

Stade dominated the opening exchanges of the second period and were rewarded for adventure with a third Beauxis penalty.

The French side then took the lead for the first time in the final courtesy of a drop-goal from Mathieu Bastareaud.

Stade grew in confidence and as they did they took more control. Their pack began to dominate and a powerful drive at an attacking scrum was rewarded with another penalty which Beauxis duly converted.

Just as Stade looked to have built a slight cushion, Evans had a chance to cut the deficit with a penalty of his own, but he missed his fourth shot at goal and Stade remained six points ahead.

Evans had no problems with his next kick, which brought Quins right back into contention and set up a tense final 12 minutes.

A Martin Rodriguez drop-goal seven minutes from time looked to have sealed the victory, but Quins dug deep and quick hands and then a delicate chip through from Danny Care saw Camacho crash over and bring the scores to within a single point.

From out-wide Evans' conversion sailed through the posts to secure the victory and a place in next season’s Heineken Cup.