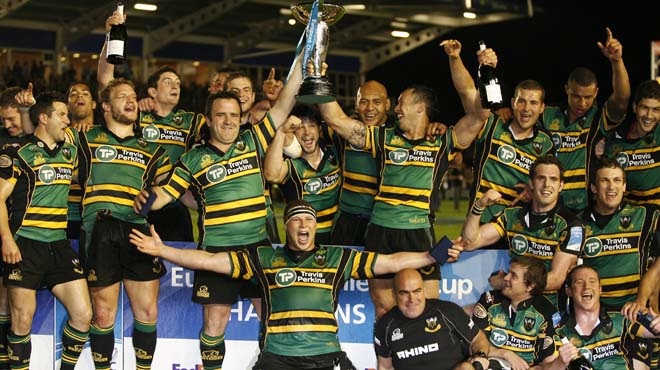 It was the second European trophy in the club’s history following their 2000 Heineken Cup final triumph over Munster and represented a remarkable turnaround in their fortunes after promotion to the English Premiership the previous season.

A crowd of 9,260 witnessed a full-blooded contest which saw two yellow cards and a red card – to Bourgoin’s Thomas Genevois – shown by referee, George Clancy, as tempers spilled over at the end of the first and second periods.

But despite the uglier moments of the match, Saints’ coaches, Jim Mallinder and Dorian West, can be justifiably proud of their success in a tournament they had targeted from the start of the season

Saints were dominant throughout and rarely gave Bourgoin opportunities to score over the 80 minutes. The pattern of the final was established after just 10 minutes. At that stage, Bourgoin had made 28 tackles to Northampton’s one and that ratio that was simply unsustainable for the French club.

Penalties were always going to come and when they did Steve Myler was up to the mark. His 100 per cent record cemented his standing as the tournament’s leading scorer.

He slotted five from five, and while he missed two drop goals, it didn’t matter. His side had played the game in the right areas and won penalties he calmly converted.

For Bourgoin, it’s another season in the Challenge Cup which was a bitter disappointment to their tearful players at the final whistle, as the famous chart of ‘Saints go marching in’ rang around The Stoop.