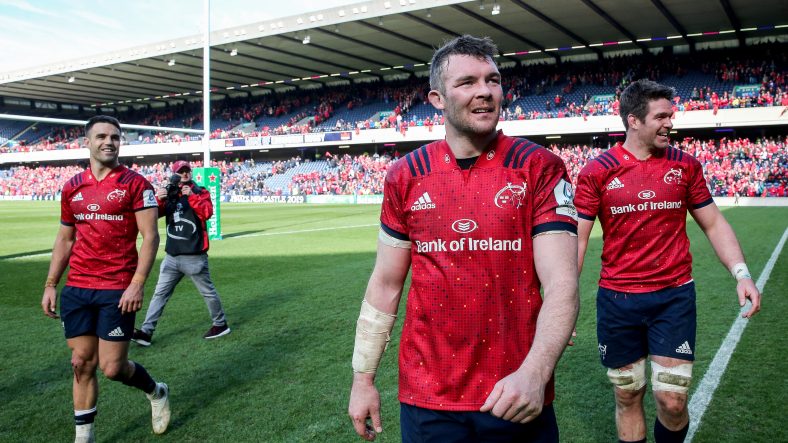 Peter O'Mahony, Conor Murray and Billy Holland celebrate after the win over Edinburgh

Munster Rugby will be hoping to end a run of six European Cup semi-finals without victory on Saturday when they take on fellow two-time winners Saracens in their Heineken Champions Cup last four clash at the Ricoh Arena.

The English side reached their sixth semi-final in seven seasons after a 56-27 win over Glasgow Warriors in the quarter-finals while Munster edged out Edinburgh Rugby 17-13 at BT Murrayfield in their last eight clash. You can watch live coverage from 15:00 BST on BT Sport and beIN SPORTS.

🗣 “The boys are extremely hungry, especially the ones that have been there."

Chris Farrell describes @Munsterrugby's drive to succeed and what they'll need to do to beat @Saracens in the #Heineken #ChampionsCup semi-finals 👇https://t.co/5KlOPC7jOC pic.twitter.com/KOXTtYo8JJ

Mark McCall (Saracens): “Their defence is the area that I see as the thing that they have most improved. It’s difficult to win set-piece ball against them and I think they have added some strings to their bow in attack.

“So, [they are] just a really good all-round team and they did a very good job at home to Exeter, who are flying in our competition over here.

“There is no obvious weakness. They do the fundamental things brilliantly, so we know we are in for a really tough challenge on Saturday.”

Chris Farrell (Munster): “They are consistently a really physical side, so that will be key for us is to stop their momentum,” the Irish international added. “They rely on set-piece and the contact area.

“They have been one of the biggest forces in Europe in the last few years and won every game in the pool stages, but we won’t be giving anything away.”

Saracens into Heineken Champions Cup final after win over Munster 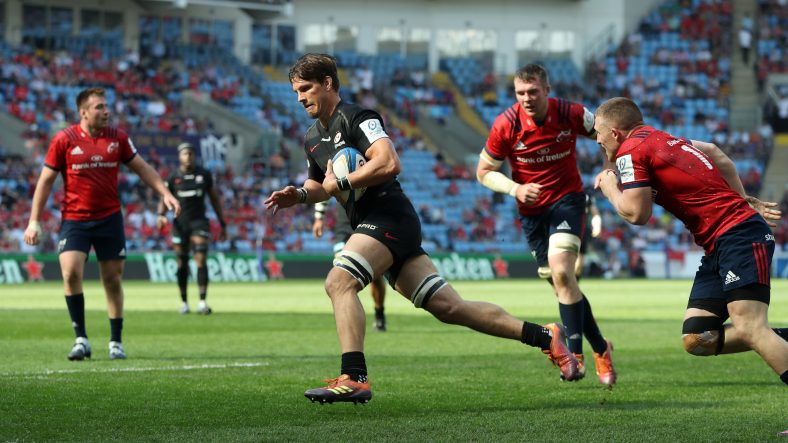 Saracens will play in the Heineken Champions Cup final next month after a 32-16 victory over Munster Rugby in their semi-final at the Ricoh Arena in Coventry on Saturday.

Tries from flanker Mike Rhodes and No.8 Billy Vunipola, plus 22 points from the boot of fly-half Owen Farrell, were enough to seal victory against a dogged Munster side.

The English club made a great start, winning a penalty inside Farrell’s kicking range, and the England international made no mistake, putting Saracens three points ahead in the first five minutes.

Munster then started to apply some pressure on Saracens, who were penalised for going off their feet at the breakdown. Munster fly-half Tyler Bleyendaal – who started in place of the injured Joey Carbery – tied the scores with a confident kick.

The semi-final has its first try 🙌

Saracens go over for the score and there's a bit of day-light between the sides now! pic.twitter.com/qbnX60qtks

Farrell added six more points to the Saracens tally with penalties in the 17th and 26th minutes, before Bleyendaal returned the favour with one of his own.

Munster scrum-half Conor Murray nailed a penalty from just inside the Saracens half to level the scores, but with the last kick of the first period, Farrell slotted over after a deliberate knock-on from the Irish province just outside their own 22.

Saracens dominated the second period and deservedly grabbed the first try on 43 minutes, when they worked the ball through their hands on the left side and flanker Mike Rhodes found a gap in the Munster line to dot the ball down.

Farrell kicked a further two penalties to put the English side 16 points ahead, but Munster did launch a mini revival with 20 minutes to play.

Murray poached the ball at a Saracens scrum inside their own 22, allowing the visitors to spread wide and find wing Darren Sweetnam, who beat the last defender and dived over in the corner.

However, soon afterwards Saracens sealed their spot in the showpiece final. Following several powerful phases from the English side’s forwards, play eventually reached Billy Vunipola, who powered his way over the try line.

The English club will play defending champions Leinster Rugby in the final at Newcastle’s St. James’ Park on May 11.