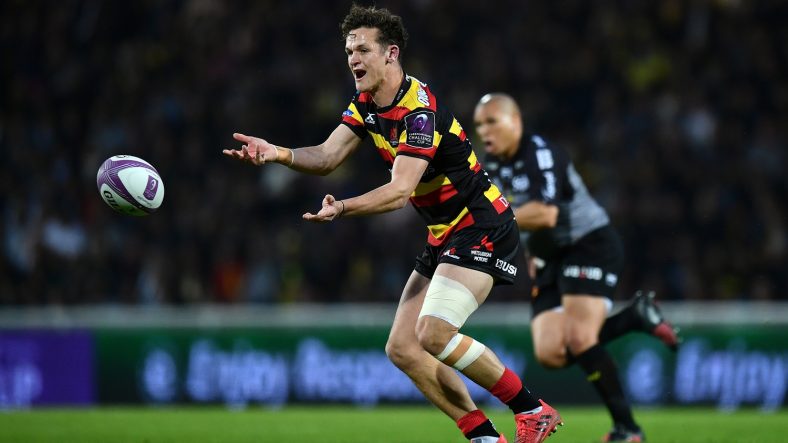 Gloucester Rugby and Stade Français have the European Rugby Challenge Cup in their sights as they prepare to lock horns at BT Murrayfield on Friday night. - 10/05/2017 18:23

Gloucester Rugby and Stade Français have the European Rugby Challenge Cup in their sights as they prepare to lock horns at BT Murrayfield on Friday night.

A mouthwatering European finals weekend will get underway in the Scottish capital when Gloucester bid to claim their second title in three seasons and Stade fight for their first piece of continental silverware.

The Cherry and Whites have saved their best for this year’s Challenge Cup. They secured their place in the final with a hard-fought 16-14 triumph at runaway TOP14 leaders La Rochelle after overcoming Cardiff Blues at home.

Director of Rugby David Humphreys has Scotland skipper Grieg Laidlaw at his disposal after his recent call-up to the British and Irish Lions squad. Fellow tour party member Ross Moriarty is also available after a breakthrough season on the international stage. Another man desperate to play a leading role is centre Matt Scott, who is returning to his the city where he forged his rugby career.

Scott said: “Whenever you move from somewhere, you wonder whether you've made the right decision. But having the chance to run out at BT Murrayfield will vindicate my move. I'm desperate to be involved.

“It’s massive, we don't get the chance to win silverware that often as a professional rugby player. You have to be at the right club at the right time and there’s luck involved as well. So when these opportunities come along you have to grasp them with both hands.

“Knowing the quality of the team that Stade Francais will put out, we've got to be at our best again and make sure that now we've got this far, we go on and win the competition.”

Stade have not had an easy route to Friday’s final. The Paris side finished second in Pool 5 to setup a quarter-final clash against the Ospreys, who had become the only team in history to finish the pool stages with six bonus-point triumphs.

Gonzalo Quesada’s side battled to a 25-21 win before Jules Plisson sealed their place in the final in dramatic fashion against Bath Rugby. Italy star Sergio Parisse will lead from the front, with Australia scrum-half Will Genia in close support. And head coach Quesada is determined to end a rollercoaster season with silverware.

He said: “This year there have been a lot of ups and downs but when you see the quality of our squad, we can beat Gloucester. It would be great for this group of players compared to everything they have been through lately.

“It will be perhaps the hardest opponent of the season. In comparison to their style of play, it is a team that will be even more difficult than Bath. They lost only once in ten games against French teams. I feel that they have been targeting this final for a while, so we will have to beat them in the management of the match, the lucidity to manage the highlights and the weak times.”

•The final will be the fourth match between the clubs. Stade Français have won all three previous meetings, two European Cup pool stage games in 2004/05 and a Challenge Cup quarter-final in 1998.
•Gloucester are appearing in the Challenge Cup final for the third time, and are also looking for a third title having won their two previous appearances (v London Irish 2006 and v Edinburgh Rugby 2015).
•This will be Stade's fifth European final but they are still striving for their first trophy, losing two European Cup finals (v Leicester Tigers 2001 and v Toulouse 2005) and two Challenge Cup finals (v Harlequins 2011 and v Leinster Rugby 2013).
•The Cherry and Whites have won 10 of their last 11 games against TOP 14 opposition in the Challenge Cup, their only loss in the run coming against La Rochelle in Round 4 this season.
•This will be the eighth Anglo-French final in the Challenge Cup, with Aviva Premiership clubs winning five of the previous seven.
•Gloucester have averaged just 10.5 turnovers conceded per game this season, the fewest of any side in 2016/17.
•Jules Plisson's drop goal in the semi-final which secured Stade's passage to BT Murrayfield was just the fourth successful drop goal in this season's tournament. Team mate Morné Steyn also slotted one earlier in the campaign (as did Angus O'Brien of the Newport Gwent Dragons and Gareth Anscombe for the Cardiff Blues.)
•All four players who have played in both of Stade's previous two Challenge Cup finals have featured for the TOP 14 side this season (Julien Arias, Julien Dupuy, Remy Bonfils, and captain, Sergio Parisse). Arias also played in the European Cup final defeat in 2005.
•Billy Burns (7) and Billy Twelvetrees (6) have made the most and second most try assists respectively this season. Sergio Parisse (3) has the most for Stade.
•No player has made more tackles than Gloucester's Tom Savage this season (73/84), however, as a team, Stade Francais have averaged more per game than any other side (133). 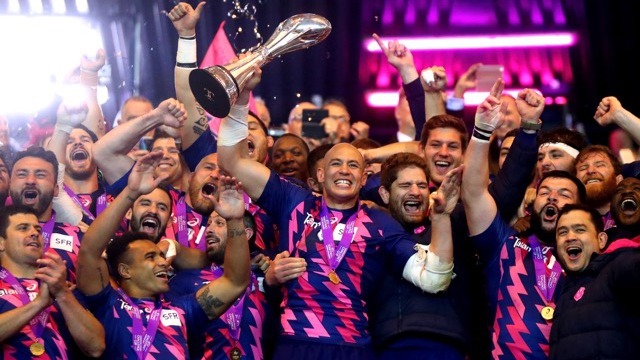 In the process they claimed their first ever European trophy, ending a run of four final defeats thanks to a try from man of the match Sergio Parisse, a breakaway effort from Jonathan Danty and Geoffrey Doumayrou's clincher.

Fly-half Jules Plisson added a conversion and a penalty as the French side sent their enthusiastic travelling support wild by lifting the trophy.

In truth the game could have gone either way, both teams locked at 10-10 at the break in an even encounter.

Gloucester's points came courtesy of a solo Jonny May effort and the boot of Billy Burns, but they struggled after the break and Doumayrou sealed Stade's success.

Danty's midfield partner scorched over the line with nine minutes to go, Plisson's replacement Morne Steyn adding the extras to start the French party. It left Ross Moriarty's late effort, which Burns converted, a mere consolation as the Cherry and Whites came up short.

With rain in the Edinburgh air both before kick-off and once the game began, it was no surprise both teams put boot to ball in the early exchanges to test their opposition under the high ball.

Burns and Plisson were playing for territory and while the pair had mixed success, it was Gloucester who moved ahead with the first try of the final.

It came against the run of play, May intercepting a loose pass from Stade centre Danty and racing over from 80 metres for a superb score. The England flyer showed superb pace to outstrip the covering French defence, Burns converting and then booting a penalty for a 10-0 lead.

That scoreline was harsh on Stade, but it wasn't long before they were back in the game.

A break down the right from wing Waisea Vuidarvuwalu gave Gonzalo Quesada's team the field position from which Plisson nailed a long-range penalty to put Stade on the board.

It soon got even better for the men in blue and pink.

Will Genia's chip through saw Hugh Pyle nearly collect the ball close to the posts, it went to ground, but Parisse collected to score.

Referee John Lacey sent the score to the TMO, but it was given by Simon McDowell and Plisson's conversion made it 10-10.

Lacey was a busy man. He then yellow carded Gloucester skipper Willi Heinz for taking out Plisson with a high shot as he attempted to clear. The incident created a skirmish between the two teams and there was still time before the break for a further dust-up near the touchline.

The second period started with Stade's impressive scrum winning a penalty before Greig Laidlaw replaced Heinz after his sin binning came to an end.

On home soil, Scotland captain and British & Irish Lion Laidlaw was given a rousing reception, but the game was still nip and tuck. Plisson then missed a penalty to ensure the teams remained level.

It was scrappy stuff with so much on the line, the game's decisive moment coming just before the hour mark. After Gloucester full-back Tom Marshall had chased down a kick through, only to reach the ball once it had gone past the dead ball line, Stade promptly went up the other end to score.

It was Danty who turned from villain to hero, the midfielder on the end of a French breakaway after they had stopped a Gloucester attack in its tracks. Plisson's missed conversion kept the game in the balance, but the Cherry and Whites were now up against it.

Stade's scrum was a real weapon and the set-piece was the basis for their victory. South African Steyn entered the field and almost immediately missed with a penalty effort.

In the end, it mattered little as Doumayrou put the gloss on Stade's victory with Steyn converting and adding a late penalty as the game came up with a late salvo which also saw Moriarty respond.