French flair set for centre stage at the Stoop 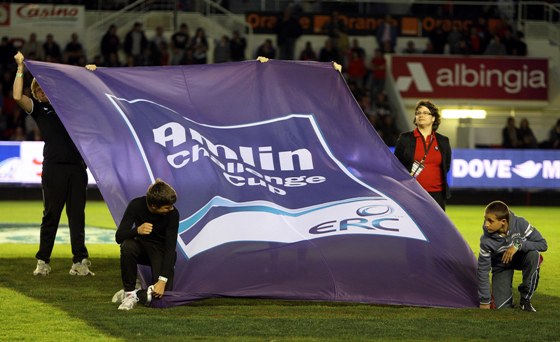 The Amlin Challenge Cup will be won by a French club for only the second time in 12 seasons but that is one of the only certainties about the showpiece showdown between Biarritz Olympique and Toulon at the Twickenham Stoop on Friday night (kick-off 8pm). - 16/05/2012 14:20

The Amlin Challenge Cup will be won by a French club for only the second time in 12 seasons but that is one of the only certainties about the showpiece showdown between Biarritz Olympique and Toulon at the Twickenham Stoop on Friday night (kick-off 8pm).

ASM Clermont Auvergne were the last French tournament winners back in 2007 but now this all-French final that raises the curtain on ERC’s finals weekend means the coveted silverware will be proudly displayed at either Stade Aguilera or Stade Felix-Mayol for the next 12 months.

And at the final whistle of what promises to be vibrant, loud and colourful occasion there will also be a first European title for the winner, Biarritz Olympique twice contesting Heineken Cup finals and Toulon the 2010 Amlin Challenge Cup final.

Biarritz finally won their battle for Top 14 survival, hauling themselves up to ninth place, but now they have the double incentive of that trophy and automatic qualification for the 2012/13 Heineken Cup.

They have been a permanent Heineken Cup fixture for the last 12 seasons and club President Serge Blanco is desperate for that run to go into a 13th campaign.

While Biarritz have won through to the final as one of the three Heineken Cup Pool runners-up to qualify for the Amlin Challenge Cup knock-out stages, Joe van Niekerk’s Toulon are there on the back of  a runaway 37-8 quarter-final victory over defending champions Harlequins and a thrilling 32-29 semi-final win against last season’s finalists Stade Français Paris.

The winners of the Amlin Man of the Match awards in those triumphs were both England internationals – and both folk heroes to the passionate Toulon fans.

Flanker Steffon Armitage, in his first season with the club, has been at the heart of their forward effort at the breakdown in particular while 2003 World Cup winning outside-half Jonny Wilkinson has amassed 220 European points in his 18 appearances in three seasons in the south of France.

That is an average of over 12 points a match and Biarritz will be primed to try and limit the goal kicking chances of Toulon’s points machine.

Biarritz have their own ace kicker in scrum half Dimitri Yachvili – 659 points in 67 European appearances – and beat two former Heineken Cup winners on route to the final, edging home 26-23 at London Wasps and winning 19-0 at home to Brive.

And while captain and No 8 Imanol Harinordoquy has provided the club with a massive boost with his timely return from a knee injury, the final will also see Sylvain Marconnet bring the curtain down on an illustrious club and country career.

The 36-year-old prop, who made his European debut back in 1997, will be playing his 88th European match and his team-mates would love to help him bow out a winner.

But, with a galaxy of international stars from around 10 nations set to parade their talents on the eve of the Heineken Cup Final across the road at Twickenham Stadium, the only certainties about this 16th tournament final is that the silverware will be heading to France engraved with the name of a new winning club. 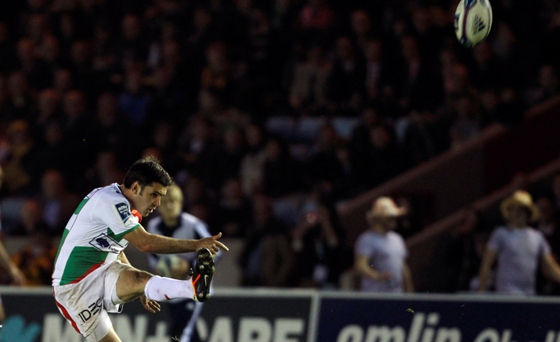 It wasn’t a classic, but it was tense, intense and dramatic. There was so much at stake for both sides, and it rained so heavily, that tries were never on the agenda.

But the golden boot of Dimitri Yachvili, who kicked all 21 points, carried Biarritz Olympique to their first European title and booked their place in next season’s Heineken Cup.

For Toulon, who ended the game by giving away a penalty one phase before they were going to give Jonny Wilkinson a chance to drop for extra-time, it was the second time in three years they have fallen at the final hurdle in the Amlin Challenge Cup.

Despite suffering two yellow cards, losing Carl Hayman and Steffon Armitage for 10 minutes each in the second half, Toulon hit back to keep in touch throughout a rain soaked game and were level at 18-18 after 65 minutes thanks to another special Wilkinson long range drop goal.

But throughout the night Yachvili had kept just ahead of his English rival in the goalkicking stakes and when he was presented with a 40 metre shot seven minutes from time he stepped up and nailed it.

Biarritz were able to keep their nerve and control the frantic closing stages and in so doing ended their European Cup finals misery by putting behind them the Heineken Cup Final defeats of 2006 and 2010.

It was also a fitting way to bring down the curtain on Sylvain Marconnet’s remarkable career. The 36-year-old prop ended up a winner in his 88th European game after losing in Heineken Cup Finals with both Stade Francais Paris and Biarritz.

Yachvili outscored Wilkinson by four penalties to three in a dour first-half, but the Toulon outside half squared things just after the break. Then came the yellow cards and two more Yachvili goals.

It was close to the end, but Biarritz’ hunger for a Heineken Cup place got them through in the end. Toulon still have the French Championship to aim for, but this was another lost opportunity as they seek to pick up their first major title since 1992.