Heineken Champions Cup Team of the Week: Round 4 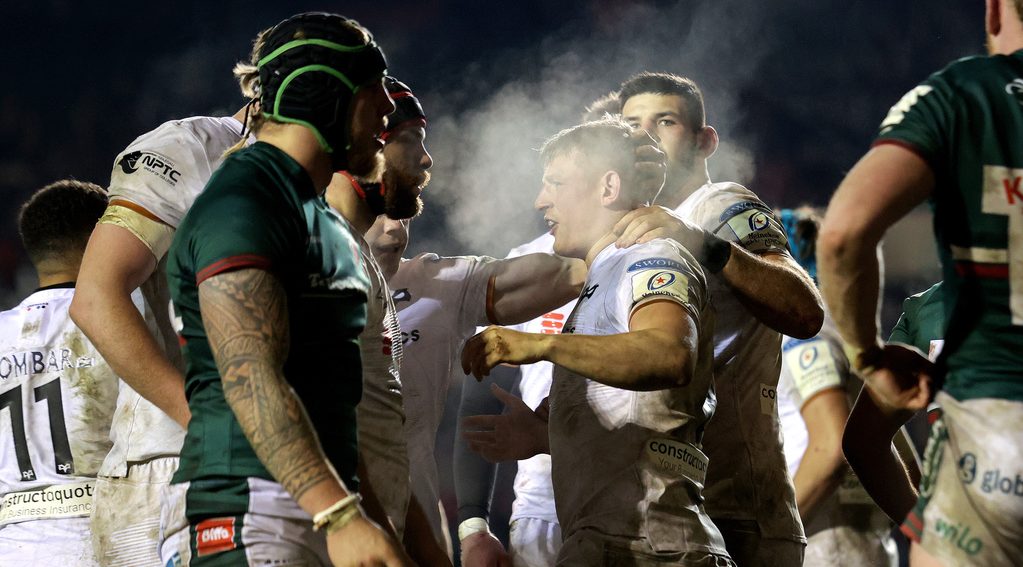 After Round 4 of the Heineken Champions Cup saw a plethora of superb individual performances, data from Oval Insights has allowed us to select the top performers in each position.

The South Africa-born Scotland international produced a rousing display as Edinburgh beat Saracens 20-14 at DAM Health Stadium. He crossed for the hosts’ second try and made 21 carries – the most of any Edinburgh player and second overall in Round 4 – gaining 41 metres. Schoeman also beat more defenders (5) than any other player in the game.

Marchand was a standout performer as Lyon thrashed Vodacom Bulls 31-7, crossing for two of the TOP 14 outfit’s tries in addition to making six carries and eight tackles.

Castres may have been heavily beaten (40-3) at Exeter Chiefs, but Chilachava proved a headache for the home team as he secured two turnovers at Sandy Park.

Lewies helped Quins beat his former team, Cell C Sharks, 39-29 at Twickenham Stoop, powering over for their crucial bonus-point score in the second half. The lock also claimed three lineouts and two turnovers.

Australian Carter was a key cog in Ulster’s vital 22-11 win over Sale Sharks in Belfast, making 10 carries – the third-most in the game – in addition to claiming two lineouts and one turnover.

Despite coming off after 46 minutes in the reigning champions’ 31-13 triumph at Northampton Saints, the flanker recorded the four-most tackles (7) for his team while also securing two turnovers, making seven tackles and seven carries.

21-year-old Tshiunza rounded off Exeter’s drubbing of Castres when he slid over for their sixth try, but he also showcased his defensive qualities as he made a team-high eight tackles in addition to grabbing a turnover. The Wales international made one line break and claimed two lineouts too.

Morgan was the hero for Ospreys when he burrowed over for the decisive last-gasp try at Leicester Tigers in his team’s 27-26 victory. It capped a terrific performance from the No.8, who made the most carries (13) and beat the most defenders (5) for the Welsh region. He was also among Ospreys’ leading players when it came to metres made (54) and tackles (8).

YOUR FULL OFFICIAL DATA-BASED ROUND 4 TEAM OF THE WEEK 🚨

Congrats to those who made it in, and to those of you that guessed the remaining spots correctly 👏#HeinekenChampionsCup pic.twitter.com/j62fvzGKVW

The veteran South African scrum-half was a real livewire for Montpellier as he came off the bench to help the TOP 14 champions recover from 21-0 down to draw 21-21 at London Irish. He completed Montpellier’s comeback when he took a penalty quickly and darted over for a 75th minute try.

The fly-half was Round 4’s joint-top points-scorer with 16 thanks to a try, four conversions and a penalty against Vodacom Bulls. Berdeu also made more carries (15) than any other player on the pitch, in addition to beating the joint-most defenders (5) and gaining the second-most metres (54) for Lyon.

O’Brien scored two of Leinster’s tries in their 36-10 success over Racing 92 and he was a persistent threat in Dublin, making the joint-fourth most carries (19) of any player in Round 4. The wing also beat the joint-most defenders (4) and was among the top peformers when it came to metres made (33).

The centre produced a terrific turn of pace to notch DHL Stormers’ third try in their 30-16 triumph over ASM Clermont Auvergne. He also made more carries (13) and beat more defenders (7) than any other player on the pitch and made the third-most metres for DHL Stormers with 54.

Slade led the charge for Exeter in their mauling of Castres with nine points through a try and two conversions. The England centre also made one line break and gained 44 metres, the fourth-most in the game.

Nowell was another Exeter back Castres failed to suppress, with the wing crossing for a try in the closing stages, gaining the third-most metres (46) in the game and beating two defenders.

Full-back Keenan also picked up a try brace against Racing and his impact on Leinster’s rampant display cannot be understated, as he made the most metres (62) and most carries (17) for the Irish province.