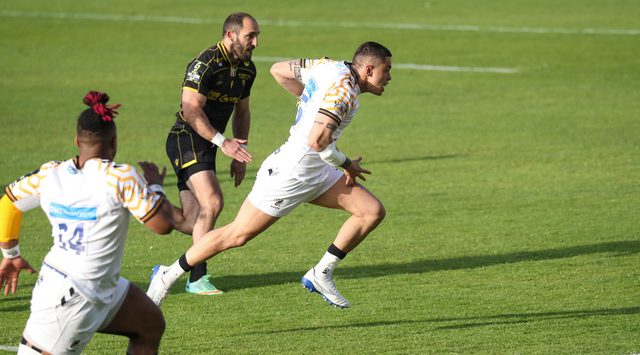 Jacob Umaga, who has scored 27 points for Wasps in EPCR competitions, returns from injury for the Gallagher Premiership side in their all-EPCR Challenge Cup domestic tussle at Bath Rugby on Friday night.

The full-back is part of a much-changed Wasps side after defeats in their first two Premiership games of the season, with Francois Hougaard starting at 14, Dan Frost making his first start of the season in a completely new front row alongside Tom West and Biyi Alo, and Nizaam Carr back at flanker.

Meanwhile, hooker Tom Dunn captains Bath for the first time in the Premiership and scrum-half Louis Schreuder makes his full debut, with Ben Spencer sidelined with concussion, as the home side also seek their first victory of the campaign.

No.8 Richard de Carpentier has a first start of the season, replacing Jaco Coetzee, who will be out of action for 10 weeks due to an ankle injury, while Miles Reid comes in for his maiden appearance of 2022/23 and Chris Cloete is back from injury to complete the back row.

Two of the four changes are in the front row, where prop Zander Fagerson and hooker Fraser Brown are recalled, while the other two see lock Scott Cummings promoted from the replacements’ bench and Rory Darge return at openside flanker.

As for Cardiff, No.8 James Ratti is back in the starting line-up for the Welsh side’s first away game of the season as they look to build on the 20-13 home win over Munster Rugby.

He is one of three changes to last weekend’s team. Matthew Morgan replaces the injured Liam Williams at full-back, while Mason Grady is brought in at centre.