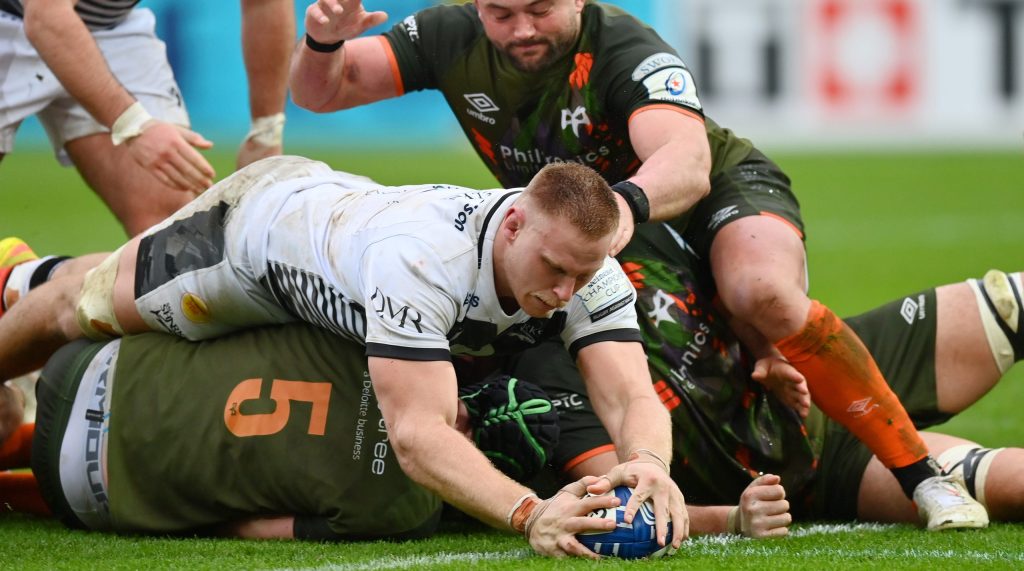 An impressive first-half performance at Ospreys meant Sale got off to a winning start in Pool A as Rohan Jense van Rensburg, Ewan Ashman and Jean-Luc du Preez all dotted down for a 21-13 win at the Swansea.com Stadium.

Alex Sanderson’s men would then have to wait over a month for their next Pool A game after their home tie to ASM Clermont Auvergne was cancelled due to COVID-19 guidelines and was therefore recorded as a 0-0 draw.

In the return fixture, Sale succumbed to a 25-19 defeat at Stade Marcel-Michelin after two late penalties from Clermont’s Morgan Parra.

Sale then finished off their pool stage campaign with a 49-10 bonus-point win over Ospreys – scoring no fewer than seven tries at the AJ Bell Stadium as they secured fifth position in the standings.

In what was a dominant performance at home to Ospreys, Sale showed their quality and exactly why they are contenders for this season’s Heineken Champions Cup when Jack Metcalf finished off a brilliant team try.

Lood de Jager with a backdoor offload, Jack Metcalf gets his first European try, and @SaleSharksRugby are having a ball out there 🤩

The score, Sale’s seventh of the game, included a series of offloads – which featured a nonchalant effort from lock Lood de Jager – before Metcalf took control to score his first try in a European competition.

Back-rower Ben Curry was in fine form throughout the pool stage for Sale, with the 23-year-old currently fourth for the most tackles made (44) in this season’s Heineken Champions Cup.

Curry has also had a hand in Sale’s attacking play this season, as he secured a terrific turnover against Ospreys, resulting in an Aaron Reed score for Sanderson’s men.

Sale will face Bristol Bears in the last 16, welcoming their fellow Gallagher Premiership side to the AJ Bell Stadium on April 9, before heading to Ashton Gate for the second leg on April 15.