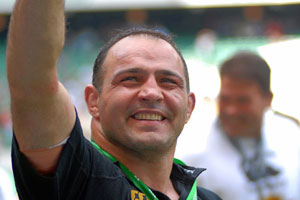 A world record club crowd of  81,076 sat in amazement as Ibanez twice caught Tigers cold with front of the line throws that created two tries to set Wasps on the victory trail.


“You can’t imagine how good it feels to have win the Heineken Cup with these guys – it is fantastic,” said Ibanez.

“Those two lineout tries were good weren’t they – two specials!”

Ibanez first outwitted the Tigers with a swift underarm pass to scrum half Eion Reddan who darted to the front of the lineout and then ran unchallenged 22m to score after 13 mintues.

And 21 minutes later lighting struck twice, this time it’s Ibanez who scored from the lineout with a sharp one-two with Simon Shaw at the font of the lineout, and the France captain has the muscle to dive over from three metres.