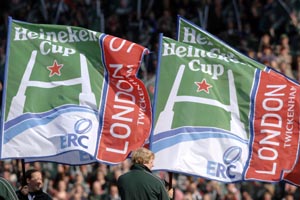 London Wasps announced that they have sold-out their allocation of 9,500 tickets for the Heineken Cup final at Twickenham Stadium, on Sunday 20 May 2007, kick-off 2:30pm.

Both finalists, London Wasps and Leicester Tigers, have sold-out their allocation of 9,500 Heineken Cup final tickets each.


The redeveloped 82,000 capacity Twickenham Stadium looks set to break the record for the largest ever attendance at a Heineken Cup final, when Leicester Tigers take on London Wasps.

The current tournament record of 74,600 who were at the Millennium Stadium in 2002 when Leicester Tigers beat Munster set to be shattered and a capacity crowd would also set a new world record for a club rugby match.

The current world record has been set by Stade Francais Paris who have hosted Toulouse and Biarritz in the French Top 14 Championship attracting crowds of just under 80,000 fans.

By the end of the Pool stages the public allocation of 56,000 tickets was sold-out. A further 7,000 tickets were allocated to ERC’s European rugby stakeholders, including official corporate hospitality and ERC’s family of partners.

Click here for a chance to win two tickets to the Heineken Cup final.