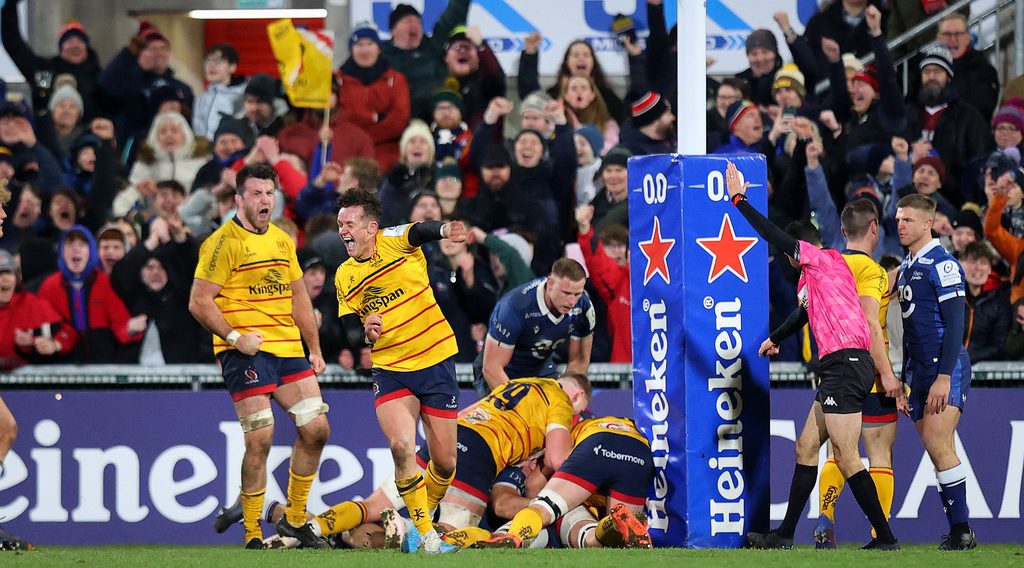 Ulster celebrate Duane Vermeulen's late try against Sale in Round 4

The Heineken Champions Cup Round of 16 fixtures were confirmed as the pool stage concluded in enthralling fashion with Round 4 this weekend.

There was late drama as teams came into the round with varying assignments – some were gunning for home advantage in the knockout stage, while others were still looking to secure qualification, whether that be for the Heineken Champions Cup or EPCR Challenge Cup.

George McGuigan’s try brace helped Gloucester Rugby triumph 26-17 at Union Bordeaux-Bègles to clinch a Pool A qualification place at the last gasp, setting up a trip to Stade Rochelais in the Heineken Champions Cup Round of 16.

Ulster Rugby sneaked through from Pool B thanks to their thrilling 22-11 win over Sale Sharks, earning them an away day at Leinster Rugby and denying their opponents qualification.

Last season’s finalists, Leinster and La Rochelle, marched to four wins from four to top Pool A and Pool B respectively, picking up emphatic victories at home to Racing 92 (36-10) and away at Northampton Saints (31-13).

The final #HeinekenChampionsCup Pool A standings 📊

Who impressed you most from the eight qualifiers? pic.twitter.com/lMRuChWVi3

Toulouse were the other side to end the pool stage with a 100%-win record, battling to a 20-16 victory over a stubborn Munster Rugby side at the Stade Ernest Wallon to take second in Pool B and book a home game against Vodacom Bulls.

Cell C Sharks will host Munster, whose defeat at Toulouse saw them miss out on a home tie, while DHL Stormers will entertain Quins, whose Round 4 victory was crucial to their progression.

Vodacom Bulls, the other South African outfit debuting in this season’s competition, were left with a trip to five-time champions Toulouse after a disappointing 31-7 loss at Lyon saw them finish seventh in Pool A.

Exeter Chiefs took second in Pool A and booked a home Round of 16 clash with Montpellier Hérault Rugby amid a 40-3 thrashing of Castres Olympique at Sandy Park.

Montpellier advanced following a sensational comeback against London Irish at GGL Stadium, recovering from 21 points down to draw 21-21 and take seventh in Pool B.

The final #HeinekenChampionsCup Pool B standings 📊

Which team surprised you from those advancing to the Round of 16? pic.twitter.com/1xXSN6h2lY

Saracens travelled to Edinburgh Rugby in the final game of the pool stage in what turned out to be a shootout for the final top-four place in Pool A, and the subsequent home advantage in the Round of 16.

Edinburgh produced a strong performance to run out 20-14 winners at the DAM Health Stadium, but with the teams tied on 15 points and +26 points difference in the pool, Saracens took fourth on tries scored.

Therefore, Saracens will host Ospreys and Edinburgh will head to Leicester Tigers in the Round 16, with that duo also having played out an exhilarating Round 4 contest.

Ospreys snatched a last-gasp 27-26 win away from home thanks to Jac Morgan’s 88th-minute try, converted by Owen Williams, though the Welsh region finished fifth in Pool B, behind Leicester on points difference.

Round 4 defeats for Clermont, Sale, Lyon and Racing see them eliminated from the Heineken Champions Cup, though their respective points hauls see them qualify for the EPCR Challenge Cup Round of 16.

Winless Bordeaux, Castres, London Irish and Northampton all drop out of EPCR competitions after finishing in the bottom two in the two pools.