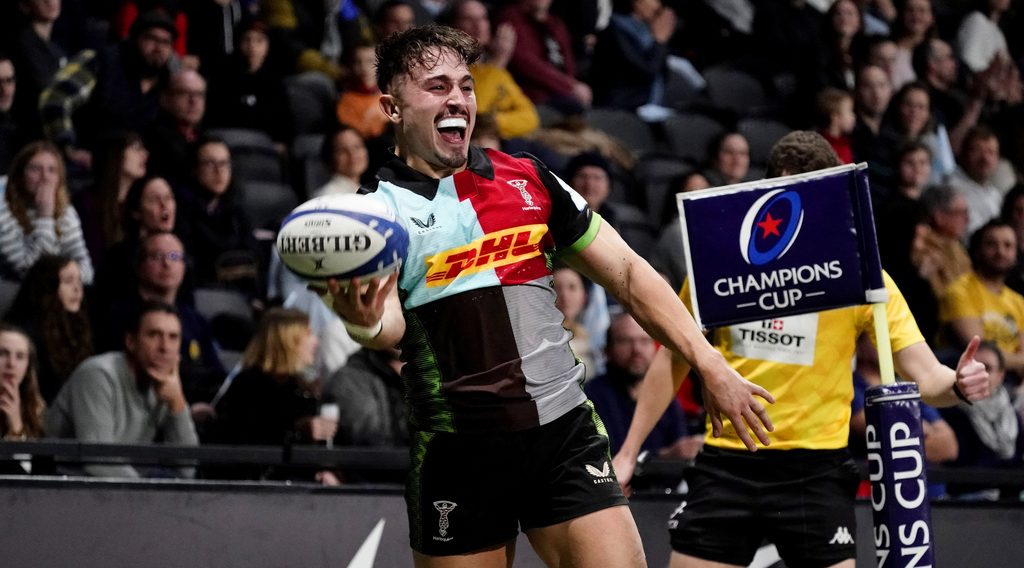 Harlequins' Cadan Murley after scoring against Racing in Round 3

With either qualification for the knockout stage, securing a home tie in the Round of 16, or qualifying for the EPCR Challenge Cup on the line, there is something as stake in all 12 Heineken Champions Cup, Round 4 fixtures this weekend as the pool stage really comes to the boil.

Ahead of the games, we take a look at some of the qualification permutations, starting with Pool A.

Though some clubs have already confirmed their places in the Round of 16, the crucial bonus of home advantage in the knockout stage is up for grabs for the four top-ranked teams in each pool.

Leinster, who host Racing 92 on Saturday, Cell C Sharks, who are at Harlequins on Saturday and Saracens, who visit Edinburgh Rugby on Sunday, are the three leading contenders for top spot in Pool A.

Saracens and Cell C Sharks will be looking to put pressure on leaders Leinster, but the Irish province’s +124 points difference and one-point advantage sees them in a strong position heading into this weekend.

Defeat for Saracens at Edinburgh could see the Scottish region leapfrog the three-time champions and would see them at risk of slipping behind Exeter Chiefs and even Vodacom Bulls if they fail to pick up a point.

As for sixth-placed Vodacom Bulls, who visit Lyon tonight at 20:00 (UK & Irish time), they are yet to mathematically secure their progression but are almost certain to book a Round of 16 place.

5️⃣ teams qualified from Pool A this weekend!

Where are your team in the standings? pic.twitter.com/bDQ5KD8GbQ

The Pretoria-based side will harbour hopes of overhauling Edinburgh or Exeter, or both, as they trail the pair by a solitary point, though their –13 points difference may prove to be a hindrance.

A positive result for seventh-placed Quins against Cell C Sharks at Twickenham Stoop could see them climb from seventh if results elsewhere go their way, while eighth-placed Racing will need to win at Leinster to guarantee qualification.

Ninth-placed Gloucester will fancy their chances of overhauling Racing should the French side be defeated at Leinster, with Quins also in sight if they are beaten by Cell C Sharks.

Gloucester are away on Saturday at 11th-placed Bordeaux, who need a win themselves to have any chance of reaching the knockout stage, though they would need favourable results elsewhere too.

A win for Lyon against Vodacom Bulls tonight could see them overhaul Quins, Racing and Lyon ahead of that trio’s Round 4 games.

Bottom side Castres Olympique’s hopes of reaching the Heineken Champions knockout stage are over, but they will be seeking a victory at Exeter to move up into ninth or 10th place to bag a spot in the EPCR Challenge Cup Round of 16.

Heineken Champions Cup Round of 16

The clubs ranked 9th and 10th in each of the pools will qualify for the Round of 16 of the EPCR Challenge Cup.

Click HERE for full details of the Heineken Champions Cup format and rules.