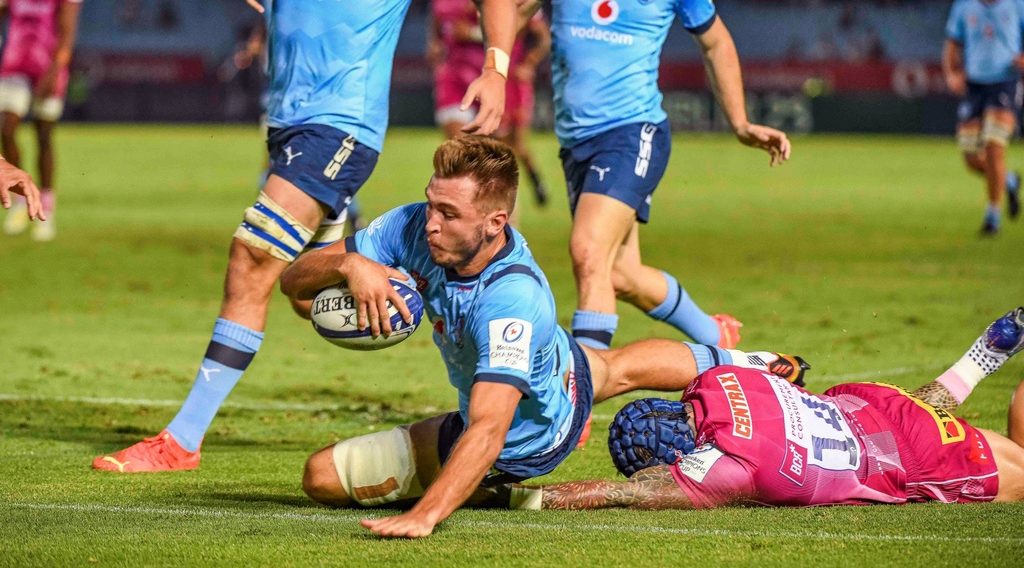 After three rounds of the Heineken Champions Cup, the Vodacom Bulls have defeated Lyon and the Exeter Chiefs, separated by a Round 2 loss at Exeter. Whilst the Pretoria-based side are yet to qualify for the Round of 16, they look in a strong position to do so.

Key to their campaign has been the quality of their work at the ruck. Vodacom Bulls have lost just six of their 186 rucks, a 97% success rate – the best in the competition.

How are the South African franchise achieving this?

There are three factors that contribute to winning a ruck:

Let’s look at the video above. First of all, Jacques Van Rooyen is the carrier. What does he do? Crucially, he wins the collision. He drives through contact before he drops to the ground. Because Van Rooyen has crossed the advantage line, he doesn’t need to battle to place the ball on the ground. That makes the job easier for the three supporting players.

Notice how they get there quickly and secure the ball before Lyon can make any attempt to steal it. Van Rooyen uses his physicality to win the contact, but agility can be just as useful a weapon as power to gain advantage over a tackler.

When watching the Heineken Champions Cup this weekend, look for those successful carries. You will almost certainly see that rucks are won – and quick ball gained – when the initial carry is a success.

Given the exceptional work of both the ball carrier and the supporting players, there is nothing left for the Lyon defenders to do.

Trying to disrupt possession at this ruck would be a waste of defending bodies due to the speed and body positions of the Vodacom Bulls’ ruckers.

How about this example? Lizo Gqoboka drives through contact and keeps his legs pumping before he goes to ground. By extending the contact, Gqoboka is able to buy time and help his supporting players.

Notice though how Loann Goujon (wearing 20 for Lyon) is able to stay in the tackle area and keep his hands on the ball. This forces Vodacom Bulls to commit men to the ruck and slows the attacking ball.

With slow ball, the defence has time to organize and minimize gaps in their front line. Slow ball is unusual for Vodacom Bulls though. In the first three rounds, 60.6% of the Vodacom Bulls’ rucks lasted less than three seconds. Only six teams have achieved 60% or more in the Heineken Champions Cup so far.

If you can win your rucks, it’s not just your attack which will benefit. The more control you have over the ruck the fewer opportunities you give to the opposition.

Turnover ball presents a fantastic attacking platform. If you don’t concede turnovers at the ruck, or concede very few, you can starve your opponent of these prospects.

Compare this to the Exeter Chiefs, who lost seven rucks in Round 3 – second only to Leinster Rugby – and conceded two tries to Vodacom Bulls which started with turnovers.

In fact, Vodacom Bulls’ attack is as demonstrative of their rucking as to the importance of limiting turnovers at the ruck, having scored four tries from turnovers in the Heineken Champions Cup so far – the highest total in the competition.

The benefit of holding onto possession is not just that you prevent the opposition from having attacking opportunities, it also allows you to be patient in attack. Vodacom Bulls were able to do this at the weekend against Exeter.

They had just 49 rucks against the Chiefs – limiting the risk of conceding a turnover and providing their opponents with an attacking opportunity – so had to ensure they weren’t wasteful.

Only playing in the right areas of the pitch, 49% of Vodacom Bulls’ rucks were in the Exeter 22; they didn’t lose a single one of their rucks in the Chiefs’ red zone. When they were able to force turnovers, Vodacom Bulls were clinical with their attack and reaped the rewards.

The key to their success was making the most of their limited opportunities – critical when playing a team who likes to dominate possession as much as Exeter.

Against the Chiefs you will often go phase after phase defending hard carries. Vodacom Bulls absorbed that pressure and when they did get the ball, they made sure to dominate the breakdown and exploit the opportunities afforded to them. This game plan relies on the ability to retain possession at the ruck.