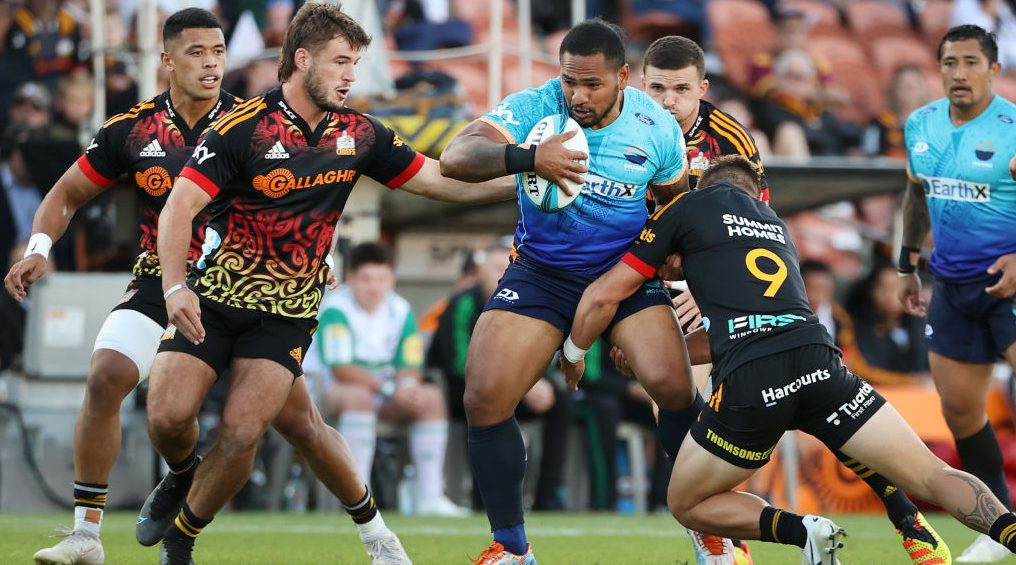 Exeter Chiefs' new signing, Solomone Kata, is tackled while playing for Moana Pasifika against the Chiefs earlier this year

The 27-year-old back, who has joined on a one-year contract from Super Rugby franchise Moana Pasifika, is the Gallagher Premiership club’s fifth signing of the summer, following Leinster Rugby duo Jack Dunne and Rory O’Loughlin, plus South Africans Aidon Davis and Ruben Van Heerden.

Chiefs director of rugby Rob Baxter told the club website: “He’s explosive, he’s dangerous and he’s a quality player. You can tell by meeting him that he’s already settling in well to the group and will give us those options we need in midfield.

“It’s no secret that Ollie Devoto is still some way away from returning. Henry [Slade] and Hendo [Tom Hendrickson] are still recovering from operations too, so we were looking a bit thin in that area.

“That said, when a guy of Sol’s quality comes on to the market, we had a good look at him, we liked what we saw and we’ve brought him here. It’s over to him now to show us what he can do. Already I’m looking forward to seeing him on the field, because I believe he will offer us something a bit different.”

Born in Tonga, Kata played for National Rugby League sides New Zealand Warriors and Melbourne Storm, before switching to union and Canberra, where he spent two seasons with the Brumbies prior to his move to Moana Pasifika.

“It’s a big move for me and my family,” said Kata, who has represented Tonga at both league and union. “I’m really looking forward to the challenge ahead.

“I’ve watched a few games and I know it’s really physical here in the UK. I like that; it plays to my strengths. I don’t have a fancy step or anything like that; I just like to go through people and enjoy the contact!”

Exeter have been drawn in Pool A of next season’s Heineken Champions Cup, where they will face Castres Olympique and Bulls.