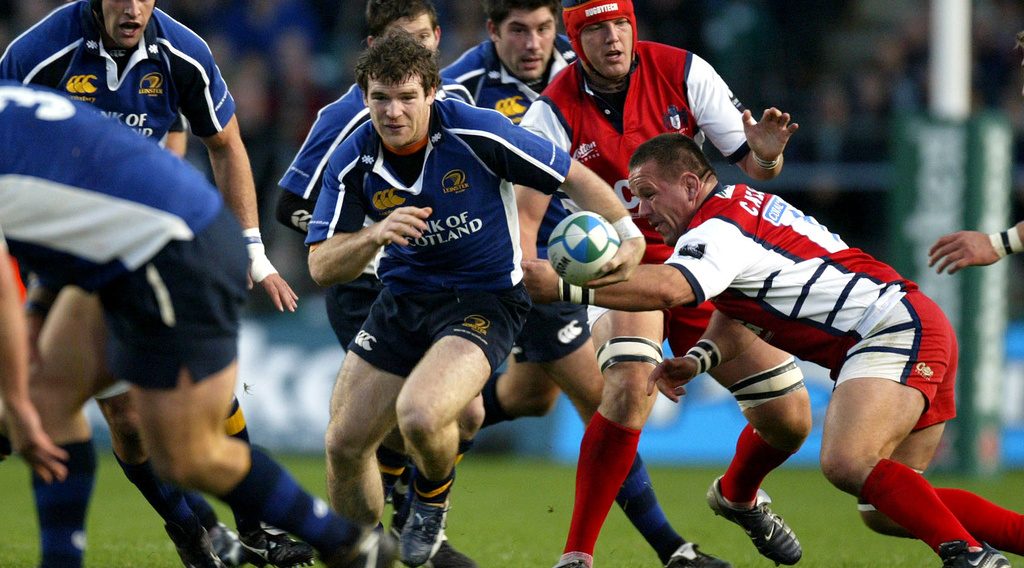 With the pool draw for the 2022/23 Heineken Champions Cup completed, we’re looking back at the previous European meetings between opposing sides. Today, we look back at the European Cup clashes between Leinster Rugby and Gloucester Rugby, who will go head-to-head in Pool A next season.

Leinster kicked off their Pool 2 campaign with a victory in front of a bumper crowd at Lansdowne Road, running in four tries against their English opponents.

Gordon D’Arcy got the ball rolling as he danced through the Gloucester defence on two minutes, but Mark Foster hit back with a superb try for the visitors, with Ryan Lamb, who had slotted a penalty shortly after Leinster’s score, adding the extras.

Following a frenetic start to the game, the Irish province took control, much thanks to 16 unanswered points from Felipe Contepomi as he converted his own try and nudged three penalties in a 20-minute spell.

Stephen Keogh then went over to extend Leinster’s lead on 36 minutes, and although Gloucester found a response through Jack Adams in the final seconds of the first half, Shane Horgan grabbed the bonus point try with an hour played, wrapping up the hosts’ win.

Leinster had topped the pool heading into the final game, but a spirited display from an already-eliminated Gloucester side at Kingsholm Stadium saw them miss out on a home quarter-final.

With Leinster’s Brian O’Driscoll in the sin bin, the hosts were awarded a penalty try on 13 minutes as a rumbling maul was collapsed close to the line.

Gloucester’s Peter Richards was then shown a yellow card for a comment aimed at referee Nigel Owens, and O’Driscoll took the opportunity to make amends for his earlier infringement as he crossed on 33 minutes.

However, the introduction of Christian Califano in the second half proved decisive for Gloucester as the prop dotted down amid a driving maul and then set the foundations for Mark Foster’s score with a destructive push in the scrum.

Felipe Contepomi’s second penalty of the game in the dying seconds reduced the deficit to six points and handed Leinster a losing bonus point, but it ultimately wasn’t enough to secure home advantage in the knockout stage.