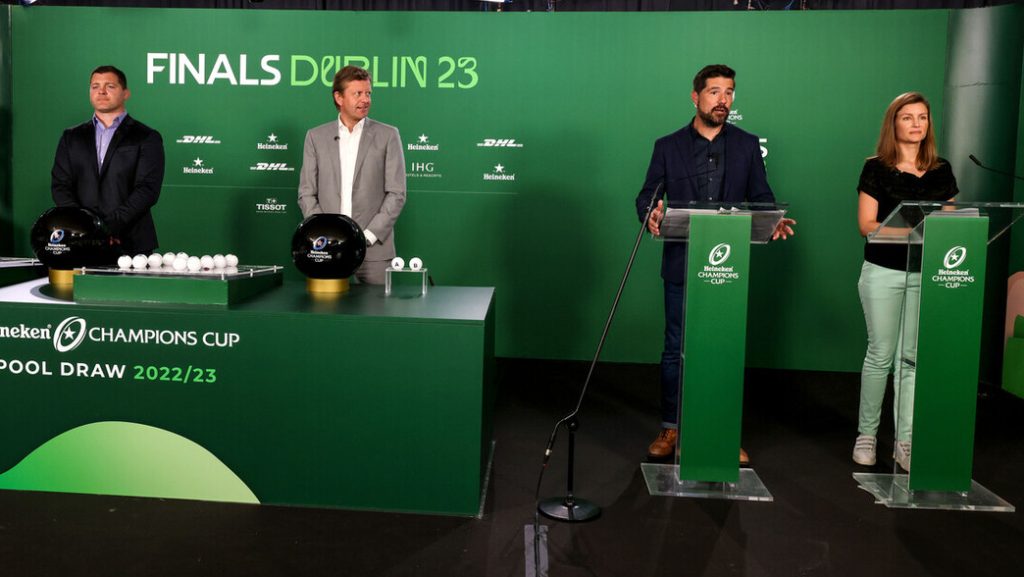 All 44 clubs in EPCR’s tournaments, including five first-time representatives from South Africa, now know their opponents for the 2022/23 season following the pool draws for the Heineken Champions Cup and EPCR Challenge Cup which were staged today (Tuesday 28 June) at Dublin’s Aviva Stadium.

The Heineken Champions Cup holders, Stade Rochelais, will be up against Northampton Saints and Ulster Rugby in Pool B, while the recently-crowned URC winners, the Stormers from Cape Town, are also in Pool B and will play home and away against London Irish and ASM Clermont Auvergne.

Leicester Tigers, who triumphed in the Gallagher Premiership final, will clash with the Ospreys and Clermont in Pool B, and Montpellier Hérault Rugby, who won the TOP 14 title for the first time in the club’s history, will be pitted against London Irish and the Ospreys again in Pool B.

URC finalists, the Bulls, will face Exeter and Lyon in Pool A, while the Sharks were also drawn into Pool A where they will clash with Harlequins and Union Bordeaux-Begles.

Four-time champions, Leinster Rugby, will go head-to-head with Gloucester Rugby and Racing 92 again in Pool A, and Munster Rugby will renew their rivalry with Stade Toulousain and Northampton in Pool B.

In the EPCR Challenge Cup, newcomers, the Lions from Johannesburg, were drawn against Stade Francais Paris and the Worcester Warriors in Pool B, while the Cheetahs, who will play their ‘home’ matches in Europe, will face Scarlets and Section Paloise also in Pool B.

For the Heineken Champions Cup draw, the 24 qualified clubs were in four tiers based on their rankings from the TOP 14, Gallagher Premiership and the URC, before being drawn into two pools of 12 – Pool A and Pool B. Clubs from the same league in the same tier were not drawn into the same pool.

The 20 EPCR Challenge Cup clubs were divided into three tiers in order to create two pools of 10 – Pool A and Pool B. Clubs from the same league cannot play against one another during the pool stage.

The Tier 1 and the Tier 3 clubs which were drawn in the same pool, but which are not in the same league, will play one another home and away over four pool stage rounds.

The event, which was streamed live on epcrugby.com, was presented by Craig Doyle (BT Sport) and Laura Tarbouriech (EPCR) with Ben Kayser and Elma Smit as ball drawers for the EPCR Challenge Cup, while Kayser and the Heineken Ireland Managing Director, Maarten Schuurman, drew the balls for the Heineken Champions Cup pools. The event scrutineer was Joe Tynan of PwC Ireland.

The exact dates of the pool stage fixtures in both tournaments, as well as venues, kick-off times and TV coverage, will be announced as soon as practicable following consultation with clubs and broadcasters.

The 2022/23 EPCR season will be played over eight weekends with four rounds of matches in the pool stage starting in December, followed by a knockout stage consisting of a Round of 16, quarter-finals, semi-finals, culminating in the Dublin finals at the Aviva Stadium on 19 and 20 May 2023.