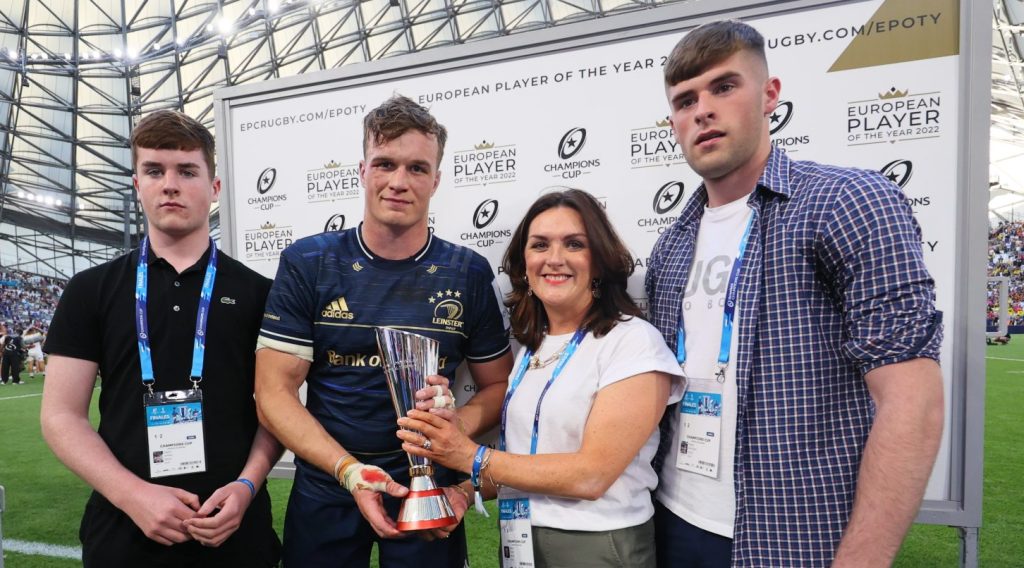 Leinster Rugby’s Josh van der Flier receives his EPCR Player of the Year award from Olive Foley, flanked by Tony and Dan Foley, at the Stade Vélodrome in Marseille in May

The Leinster Rugby wing forward, Josh van der Flier, has rounded off an outstanding European season by being named EPCR European Player of the Year 2022.

Van der Flier becomes the third Leinster player to claim one of the most prized individual accolades in the game following in the footsteps of club legends Sean O’Brien (2011) and Rob Kearney (2012).

The 29-year-old, who impressed once again in Leinster’s losing Heineken Champions Cup final display, was presented with the Anthony Foley Memorial Trophy following the final at the Stade Vélodrome in Marseille.

More than 30,000 votes were registered on HeinekenChampionsCup.com, and that poll, combined with the verdict of an expert panel of judges, eventually determined the winner.

Van der Flier edged out his teammates Caelan Doris and James Lowe for the prestigious award, as well as Grégory Alldritt of Stade Rochelais, and Antoine Dupont of Stade Toulousain who were also included in the five-player shortlist.