Leinster ready to take on Stade Rochelais up front 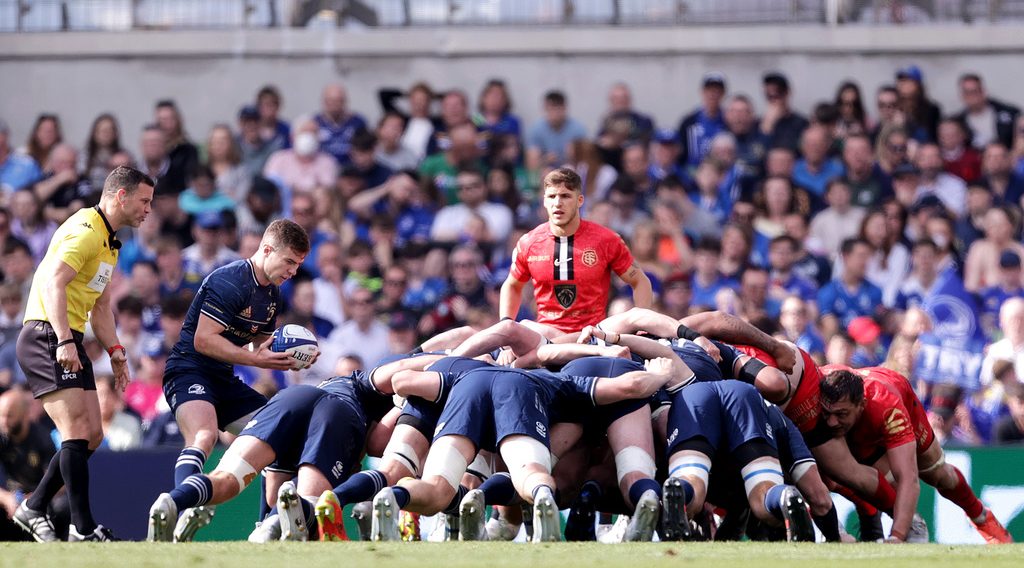 Leinster Rugby are ready to resist Stade Rochelais’ forward power when they meet in the Heineken Champions Cup final.

That is the message from back-row Caelan Doris as the teams prepare to do battle for European rugby’s greatest prize in Marseille on Saturday 28 May.

La Rochelle’s pack proved too strong in last season’s semi-final when they triumphed 32-23 en route to a final defeat against Stade Toulousain.

But having nullified Leicester Tigers and Toulouse in their last two Champions Cup matches, Doris says they have every reason to believe they can take on the “big fellas” of La Rochelle up front.

Doris said: “You can’t get too much bigger than the likes of [Emmanuel] Meafou and [Rory] Arnold that we saw against Toulouse and I think we dealt with them pretty well.

“Some of the work Denis Leamy has done around our tackle technique, our two-man tackles and things like that, has definitely contributed to that.

You can vote for Caelan Doris as your #EPOTY2022 now ➡️ https://t.co/lQJpkQ37G2#HeinekenChampionsCup pic.twitter.com/ge1qrL6ego

“It’s going to be another huge challenge against La Rochelle.

“Obviously Rona O’Gara knows us pretty well, so I’m sure he will be coming up with a good plan around how to try and stop us, but hopefully we’ve improved since last year in terms of stopping the big fellas.”

Tackle technique has been a big focus for Leinster since last season’s semi-final loss, not least with high tackles being penalised for dangerous play more than ever. But this needs to be balanced with avoiding too much full-contact training.

Doris explained: “There’s very little full-on live stuff. A lot of it is with bags and it’s just about simulating the position.

“Somebody is just against a pad, leaning up against a post, trying to get the drop to a good height and being in a good position.

“Some guys might get a few live reps, but there’s not much of that. It’s mostly around technique at a slower pace and then building up a little bit to maybe 80 or 90%, but there’s very little full-on.”

Another skill that has been catching the eye is the quality of passing among Leinster’s forwards, typified by prop Tadgh Furlong’s impressive long-range distribution against Toulouse.

Doris said: “When [senior coach] Stuart [Lancaster] first came, there was quite a big emphasis on improving the skills of forwards and the ability to give those quick passes or the ones out the back.

“We did skills mixed in with our gym sessions for quite a while and still have done that sometimes this season.

“The fixed skill is intertwined on the pitch with the more unstructured way as well. It’s practicing that fixed skill and putting it into practice in a live scenario.

“I can definitely see progression in myself and everyone around me over the last number of years. There were definitely some good ones there on Saturday.”

Doris did not make the matchday 23 for their 2019 final defeat against Saracens, but travelled with the team. He was struck by the number of Leinster fans who made the trip to Newcastle and would love to give them something more to cheer this time.

He said: “I just remember the sea of blue as we arrived at the stadium and how strong the travelling support was and there being an unbelievable atmosphere.

“Obviously it wasn’t a successful day in the end.”