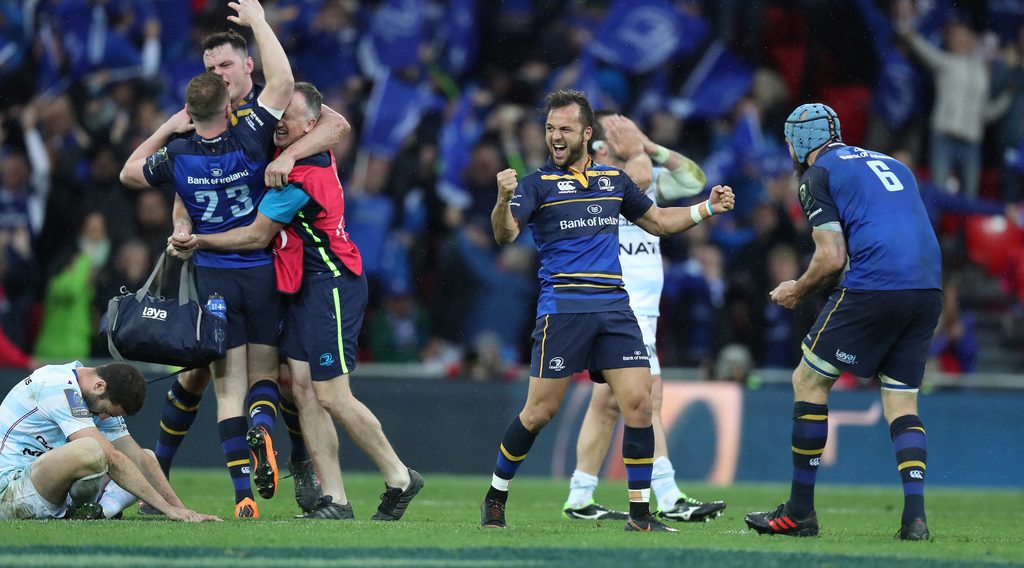 As Leinster Rugby gear up for the Heineken Champions Cup final in Marseille on May 28, we review their illustrious history in the competition’s showpiece game.

Leinster secured their first European title thanks to a 70th-minute penalty from a 23-year-old Johnny Sexton at Murrayfield.

Leicester led 13-9 at half-time thanks to a try from Ben Woods, converted by Julien Dupuy, who also added two penalties.

A Sexton penalty plus drop-goals from Sexton and Brian O’Driscoll kept Leinster in the hunt before Dupuy slotted a third penalty.

Leinster hit back quickly with a try from Jamie Heaslip, converted by Sexton, who then landed the decisive kick.

A proverbial game of two halves saw Northampton lead 22-6 at the break, only for Johnny Sexton to inspire a famous Leinster comeback at Cardiff’s Millennium Stadium.

Sexton had landed two penalties, but then inspired Leinster’s turnaround with tries on 43 and 52 minutes.

He converted these plus a third from Nathan Hines and added two more penalties for good measure.

Leinster retained their title in style with a dominant victory over fellow Irish province Ulster at Twickenham Stadium.

Sexton converted a penalty try and added a penalty, but Ulster clung on with Pienaar slotting a third penalty and Dan Tuohy going over.

Neither side could manage a try in an absorbing contest that was won by Isa Nacewa’s 78th-minute penalty.

Johnny Sexton and Teddy Iribaren landed two penalties apiece in the first half.

Iribaren’s third and fourth penalties put Racing 9-6 and 12-9 ahead, but Sexton and then Nacewa levelled before the latter’s winning kick.

Leinster’s only European final defeat came in their most recent clash where they were outgunned by Saracens at St James’ Park, Newcastle.

Tadhg Furlong’s try plus a penalty and a conversion from Johnny Sexton had put Leinster 10-0 ahead.

But Saracens were level at half-time, thanks to Sean Maitland’s try, plus a conversion and penalty from Owen Farrell.

Saracens sealed victory in the second half with a Billy Vunipola try and five more points from Farrell.