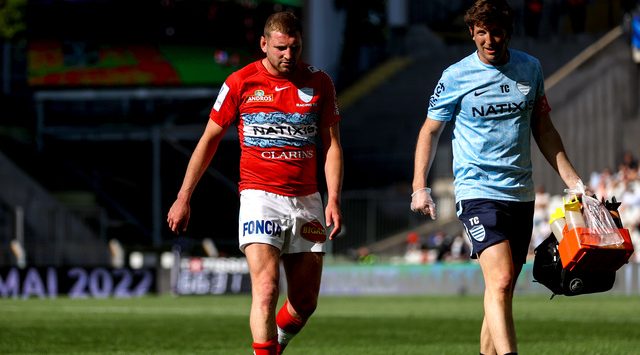 Racing's Finn Russell hobbled off late on against La Rochelle

Racing 92 fly-half Finn Russell has spoken of his disappointment after his side were dumped out of the Heineken Champions Cup in the semi-finals on Sunday.

Racing came into the game with hopes of reaching the final of the competition for a fourth time, but were defeated 20-13 by TOP 14 rivals Stade Rochelais, who will now go on to face Leinster Rugby in Marseille.

Russell reflected on a game where Racing squandered several chances to add to their points tally amid sweltering heat at Stade Bollaert-Delelis in Lens.

“There were a few things in the first half that we didn’t capitalise on,” the Scottish international recalled. “[We] didn’t go in at half time as far ahead as we wanted.

“Second half we had a couple of chances, didn’t manage to finish them off and their driving maul – we got two yellow cards – they got a penalty try there.

“Frustrating for us, we put everything into this tournament and we’ve come up short.

“It was tough out there, obviously with the weather, it’s hot so it’s tiring out there.

“I think it was a physical game, especially for the forwards up front, our defence and their defence. So that takes it out of you a lot in this heat.

“We wanted to play a quick game and we didn’t really get that as much as we wanted.”