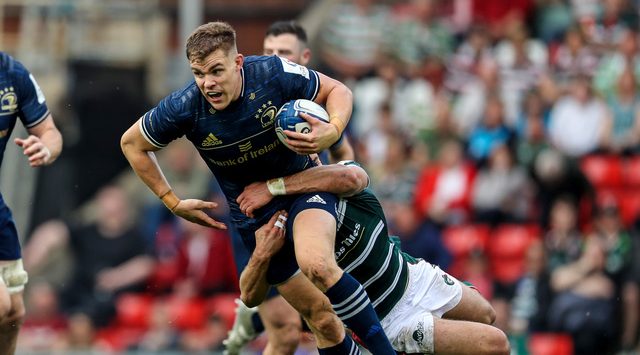 Leinster Rugby centre Garry Ringrose is anticipating an improved Stade Toulousain side in their Heineken Champions Cup semi-final at the Aviva Stadium on Saturday.

The reigning champions needed a 4-2 victory in a place-kick competition to get past Munster Rugby at the same venue in last weekend’s quarter-finals, after drawing 24-24.

But Leinster, who saw off Leicester Tigers 23-14 at Mattioli Woods Welford Road, will be welcoming an even stronger outfit than the one who scraped past their United Rugby Championship rivals, according to Ringrose.

“I think they will raise their levels again this weekend,” the Irish international stated. “On our side, we will try to enjoy the fact of playing in front of our supporters. It makes the match even more special.

“Toulouse have a lot of quality, with the ability to score from anywhere on the pitch. They keep the ball alive and play after contact.

“They have a sixth sense, an instinct to find each other. They are perfectly synchronized and are very difficult to stop.”

Ringrose revealed that Leinster, who can equal Toulouse’s record of five European crowns should they triumph in this season’s competition, are fully prepared for Saturday’s clash after their bruising encounter with Leicester.

“We once again have the opportunity to achieve great things in this competition,” he said. “Playing against Toulouse, a club with a rich European history, the only team with five stars on their shirt, will be a test against the very best in Europe.

“We were very happy with our victory. It was an important part of our progress. We had a very difficult game, which was physically and mentally challenging at the same time.

“Everyone arrived on Monday morning with aches and pains. But in terms of energy, motivation, the group is looking forward to Saturday.”

Ringrose and his teammates are keen not to repeat the heartbreak of last season’s semi-final, when Leinster were defeated 32-23 by another TOP 14 side, Stade Rochelais.

“We always enjoy winning games, but it’s the defeats that make you progress,” he insisted. “We learnt a big lesson after that defeat.

“It has guided our motivation since the beginning of the season. We must now seize this opportunity on Saturday.”