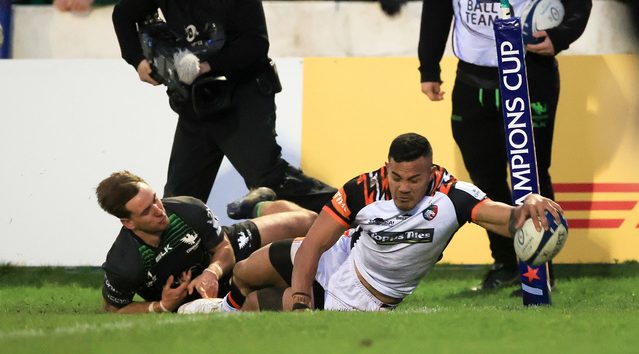 A last-gasp George Ford penalty saw Leicester snatch a 16-13 win at Union Bordeaux-Bègles in Round 1, before they battled to a 29-23 home victory over Connacht Rugby in Round 2.

There was late drama in the reverse fixture against Connacht as wing Hosea Saumaki dotted down to see Leicester triumph 29-28 at The Sportsground, having trailed 28-10 early in the second half.

With Leicester awarded a 28-0 win in their Round 4 game against Bordeaux amid coronavirus issues, Steve Borthwick’s side progressed to the Round of 16 as winners of Pool B.

Tigers’ battling success over Bordeaux in Round 1 set the tone for their Heineken Champions Cup campaign, which has seen them produce a trio of gritty performances to grind out wins.

Fly-half Ford ultimately held his nerve to slot a 77th minute penalty to hand his side victory and further instill the winning mentality that has defined much of Leicester’s season so far.

Time to switch your attention back 👀

Though Ford played a crucial role in Leicester’s win at Bordeaux, hence his EPCR European Player of the Year nomination, No.8 Jasper Wiese was immense in the three fixtures they played.

After Round 3, only Glasgow Warriors’ Jack Dempsey (43) had made more carries than Wiese (37), and such was the towering forward’s threat on the ball, only two backs – Ulster Rugby’s Michael Lowry (15) and ASM Clermont Auvergne’s Damian Penaud (17) – had beaten more defenders than him (13).

Leicester go up against ASM Clermont Auvergne over two legs, travelling to Stade Marcel-Michelin on April 10 before welcoming the TOP 14 outfit to Mattioli Woods Welford Road on April 16.

Clermont reached the last-16 after finishing eighth in Pool A, picking up a solitary win against Sale Sharks in Round 3.