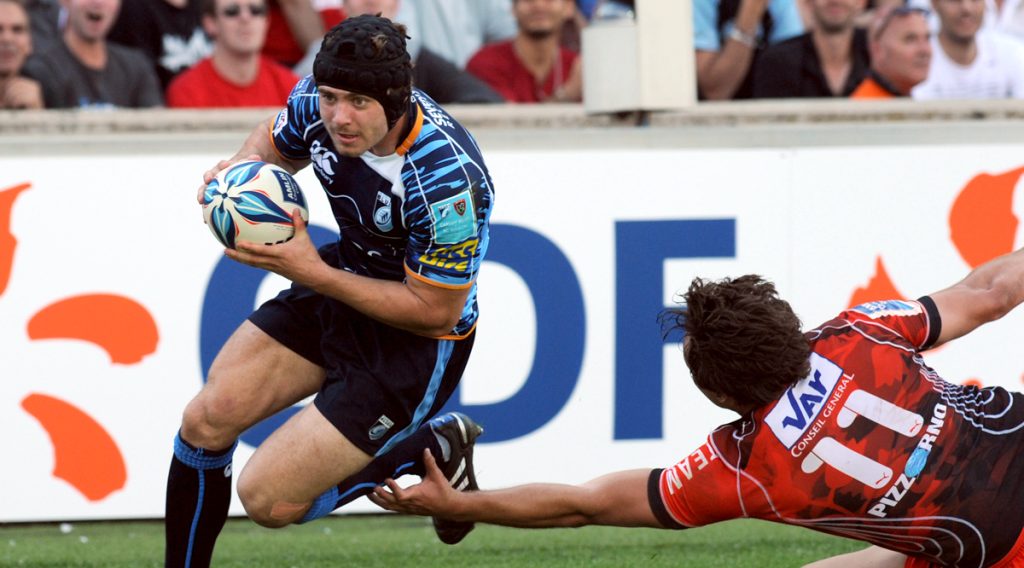 Leigh Halfpenny goes over for Cardiff's second try against Toulon

As EPCR’s 2022 finals at the iconic Stade Vélodrome in Marseille in May edge ever closer, we will be looking back at some of the epic European encounters the venue has hosted. We continue our series of features with a review of the 2010 Challenge Cup final between Cardiff Blues and RC Toulon.

Cardiff Blues – now Cardiff Rugby – became the first Welsh team to lift a European title as they triumphed 28-21 over RC Toulon in front of a competition record crowd of 48,990.

Jamie Roberts, Leigh Halfpenny and Bradley Davies all went over in the second half for Cardiff as they condemned Toulon to the first of their three Challenge Cup final defeats.

After surviving an early onslaught, wing Halfpenny put Cardiff in front with a penalty on four minutes, with fly-half Jonny Wilkinson hitting back from the tee moments later for Toulon.

Cardiff edged ahead again on 22 minutes through another three-pointer, this time coming from full-back Ben Blair, but Wilkinson levelled things up once again with half an hour played.

Both sides struggled to capitalise on attacking opportunities until 35 minutes, when Toulon centre Sonny Bill Williams danced through the Cardiff defence and dotted down for the game’s opening try.

Wilkinson’s conversion handed Toulon a 13-6 half time lead, and the French outfit started the second period in the ascendency, but a monumental defensive effort from Cardiff restricted them to a penalty out wide.

Wilkinson was off target with his kick at the posts, and in a further blow for Toulon, the influential England international was injured in the process, and was replaced by Mafi Kefu.

It was then Cardiff’s turn to apply some extended pressure, and centre Roberts eventually barreled over under the posts on 50 minutes after scrum-half Richie Rees did well to recycle a loose ball.

After Blair’s conversion levelled the scores once again, before he exchanged penalties with Toulon centre Tom May, but Cardiff would wrestle control with two tries in five minutes.

Halfpenny first darted over in the corner before lock Davies smashed over from close range, leaving Cardiff with a 12-point lead heading into the final 10 minutes.

Toulon replacement Thomas Sourice crossed in the closing stages to keep the contest alive, but Cardiff held on for their first of their two Challenge Cup titles.

Meanwhile, Toulon have already booked their place in the knockout stage with a game to spare, winning all three of their Pool A fixtures so far.