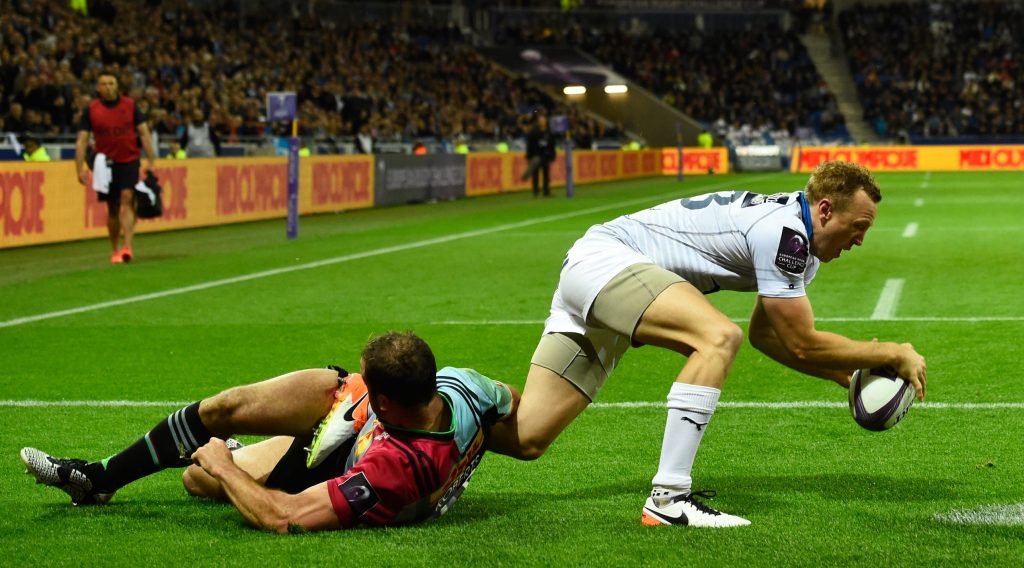 With Harlequins set to meet Montpellier Hérault Rugby in the Heineken Champions Cup Round of 16 next month, we’ve revisited the 2016 Challenge Cup final, which saw the two sides go head-to-head at Grand Stade de Lyon…

A try brace from full-back Jesse Mogg helped Montpellier claim their maiden Challenge Cup title and prevent Quins from lifting the trophy for a fourth time.

Quins hit the front early on, with former All Blacks fly-half Nick Evans kicking a penalty inside five minutes, but his opposing number Demetri Catrakilis drew Montpellier level from the tee moments later.

However, Mogg, who had come off the bench to replace the injured Benjamin Fall, landed the first major blow of the final as he tip-toed down the touchline and dived over in the corner on 22 minutes.

But two quickfire Evans penalties reduced the deficit for Quins, and the game was finely poised as the two teams went in for half-time.

With Tom Curry out, @EnglandRugby have a back row conundrum…

Evans was off target with an effort early in the second half, and Montpellier would wrestle control of the contest as they set up camp on the Quins line.

Mogg proved to be the difference once again, climbing above Quins centre Jamie Roberts to claim a cross-field kick from replacement scrum-half Benoit Paillaugue and dot down for his second score.

Catrakilis converted and further extended Montpellier’s advantage from the tee on 54 minutes, before Quins squandered a try-scoring opportunity when wing Tim Visser was unable to gather a kick from full-back Mike Brown.

A fourth Catrakilis penalty on 67 minutes looked to have put Montpellier out of sight, but wing Marland Yarde gave Quins a lifeline when he ran onto a grubber kick from replacement fly-half Ben Botica and planted down.

A penalty from Botica then put Quins within a converted try of drawing level with just under three minutes to play, but there would be no miracle comeback as Montpellier held on to clinch the trophy.