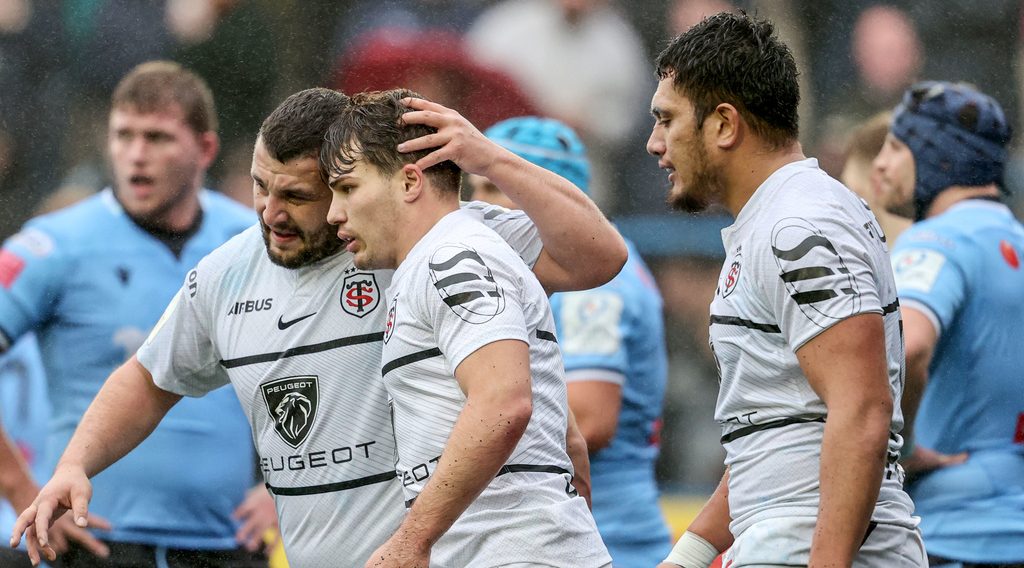 Toulouse celebrate a try against Cardiff in Round 1

Toulouse, who were crowned European champions for a fifth time last season, kicked off their pool stage campaign with a 39-7 victory at Cardiff Rugby.

The depleted hosts went over to take a surprise lead early on, but Toulouse ran in five tries and Romain Ntamack kicked 14 points as they cruised to victory.

The TOP 14 side would suffer a setback in Round 3 as they went down 30-22 at 14-man Wasps, but they would progress to the knockout stage after finishing seventh in Pool B.

Toulouse started their title defence sluggishly in Wales, but they sprang to life on 24 minutes and it was last season’s EPCR European Player of the Year Antoine Dupont who was the catalyst.

The scrum-half spotted a gap in the Cardiff defence just inside his own half and produced a trademark turn of pace and hand-off to burst towards the line.

Some excellent support lines and slick handling then allowed Anthony Jelonch to dive over in a demonstration of the threat Toulouse will once again pose in the Heineken Champions Cup.

Dupont may have only played 67 minutes in this season’s competition, but he showed glimpses of his scintillating best as he set up a handful of tries in addition to dotting down himself against Cardiff.

The 25-year-old made 171 metres, three line breaks and beat 11 defenders in the Round 1 clash.

Toulouse face off against Ulster Rugby over two legs, hosting the Irish province on April 9 before travelling to Kingspan Stadium week later.

Ulster progressed to the Round of 16 after winning all four of their Pool A games to finish second.