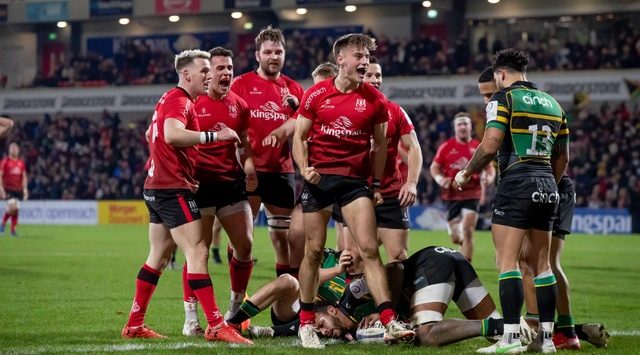 Ulster advanced to the knockout stage after picking up four wins from four games to finish second in Pool A.

19 points from the boot of John Cooney helped the Irish province to an impressive 29-23 victory at ASM Clermont Auvergne in Round 1, before they survived a late rally by Northampton Saints to claim a 27-22 home win in Round 2.

Ulster outclassed Northampton again in Round 3 as Michael Lowry scored a try brace in a 24-20 success at cinch Stadium at Franklin’s Gardens, a result which confirmed their passage to the Round of 16.

A lofty finish in their pool was sealed as they picked up a fourth win in Round 4, holding off Clermont’s dramatic late surge to triumph 34-31 at Kingspan Stadium.

Ulster produced an excellent display at Clermont in Round 1 but trailed the TOP 14 side heading into the final quarter of an hour.

However, Nick Timoney squeezed over the line for a score which looked set to be ruled out for a knock-on, only for a TMO review to discover that the ball came off a Clermont hand.

With the try awarded, the momentum swung back in Ulster’s favour and they held on for a victory which would kickstart an outstanding pool stage campaign.

Is it time for @IrishRugby to give @UlsterRugby's Mike Lowry a shot?

Full-back Lowry caught the eye with his lightening pace and nifty footwork, and his tries in the latter stages of the pool stage were crucial to his team’s progression to the Round of 16.

In addition to his double at Northampton in Round 3, the 23-year-old dotted down for Ulster’s second try against Clermont, and over the course of the pool stage he made more metres (563), line breaks (8) and beat more defenders (23) than any other player.

Ulster travel to last season’s winners Stade Toulousain in the first leg on April 9 before welcoming the TOP 14 outfit to Kingspan Stadium a week later.

Toulouse finished seventh in Pool B – they beat Cardiff Rugby 39-7 at Cardiff Arms Park before losing 30-22 at Wasps.