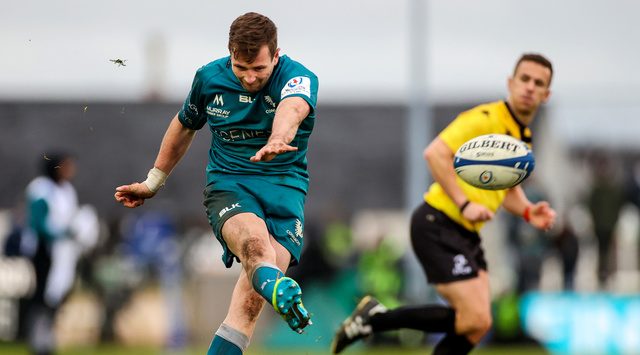 Connacht Rugby fly-half Jack Carty, a key figure in the Irish province’s first qualification for the knockout stages of the Heineken Champions Cup, starred on the domestic stage too on Saturday, kicking 14 points in his side’s 29-23 win at Scarlets in the United Rugby Championship.

Carty, who tallied 43 points during the pool stage, landed four penalties and a conversion to add to tries from Sam Arnold, Leva Fifita and John Porch to give Connacht their first victory at Parc y Scarlets.

Elsewhere on Saturday, all three Heineken Champions Cup Round of 16 teams in action in the Gallagher Premiership also chalked up victories.

Leicester Tigers, who face ASM Clermont Auvergne, cemented their place at the top of the table with a 24-20 triumph at Bath Rugby thanks to tries from Jasper Wiese, Richard Wigglesworth and Freddie Burns.

And Sale Sharks, who take on Bristol Bears, held on for a 22-21 success at Northampton Saints, Arron Reed, Sam James and Rohan Janse van Rensburg notching the visitors’ tries.

In the TOP 14, Stade Français Paris, who meet Racing 92 in the Heineken Champions Cup Round of 16, thrashed Biarritz Olympique 65-19 with 10 tries at Stade Jean Bouin.

Stade Rochelais, who face Union Bordeaux-Bègles in the last 16, ran out 31-27 winners at home to Clermont, with Paul Boudehent, Levani Botia, Tawera Kerr-Barlow and Thomas Berjon going over in addition to 11 points from the boot of Pierre Popelin.

Montpellier drew 16-16 at CA Brive, where Guilhem Guirado went over to level the scores late on after Jan Serfontein had also dotted down for the visitors.

However, Stade Toulousain, last season’s Heineken Champions Cup winners and Ulster Rugby’s last-16 opponents, slipped to a 27-22 defeat at Section Paloise despite a try brace from Dimitri Delibes and a Matthis Lebel score.