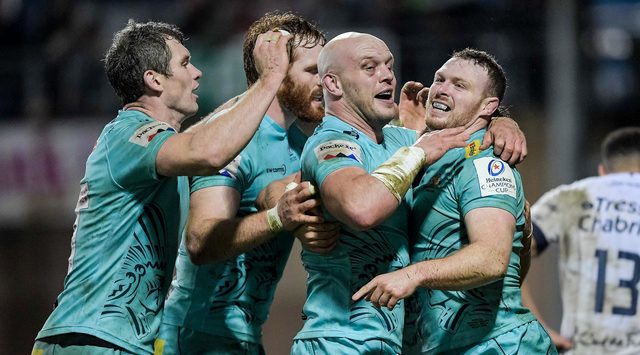 Exeter celebrate a try against Montpellier in Round 1

Exeter Chiefs hooker Jack Yeandle is expecting a tight affair when his side travel to Glasgow Warriors in Round 2 of the Heineken Champions Cup Pool B.

The 2020 Heineken Champions Cup winners kicked off this campaign with a 42-6 win over Montpellier Hérault Rugby on Saturday evening.

In last season’s pool stage Exeter breezed to a 42-0 home win over Glasgow, but Yeandle reckons a repeat of that result is unlikely when they travel to Scotstoun Stadium in Round 2 on Saturday.

“I expect them to be a lot better, to be fair,” he said. “Every time we’ve been up there, it’s been a real test. The cold is probably going to come into it as well. No doubt it’s going to be absolutely Baltic up there.

“They have always been a real challenge. I think we’ve had some really close games up there over the past couple of years.

“When they came down here last year, I think we managed to stick to our game plan well, whereas Glasgow uncharacteristically had quite a lot of errors in their game.

“I think it’ll be a completely different story when we get up there and I think it’s going to be a very, very close encounter. Again, hopefully we’re looking to chase the result and really push them to the limits.”

Yeandle revealed that Exeter’s frustrating 34-22 defeat to Leinster Rugby in the quarter-finals last season – which saw them squander an early 14-0 lead – is still fresh in his and his teammates’ minds.

“There’s a lot [of excitement] and I think a lot of it rides on the fact that we were really disappointed with last season and how it went, particularly with how we started that game and gave ourselves a big advantage heading into the later part,” he commented.

Not one, not two, not three – FOUR defenders sent the wrong way 🤯

“Obviously, tasting success the season before, I think that hunger and desperation is definitely back and it all comes down to how we kick the campaign off. You want to lead with the best foot and I think that comes down to hitting the ground running.

“We got off to a really good start with two tries in the first half, but I think it was a lot of unforced errors that ultimately hurt us.

“Myself coming off the bench, I know that I didn’t play to the best of my ability and I was pretty annoyed at my own performance in that game.

“There were probably a few other lads as well who could hold their hands up, but it’s not an individual effort; it’s a team sport.”