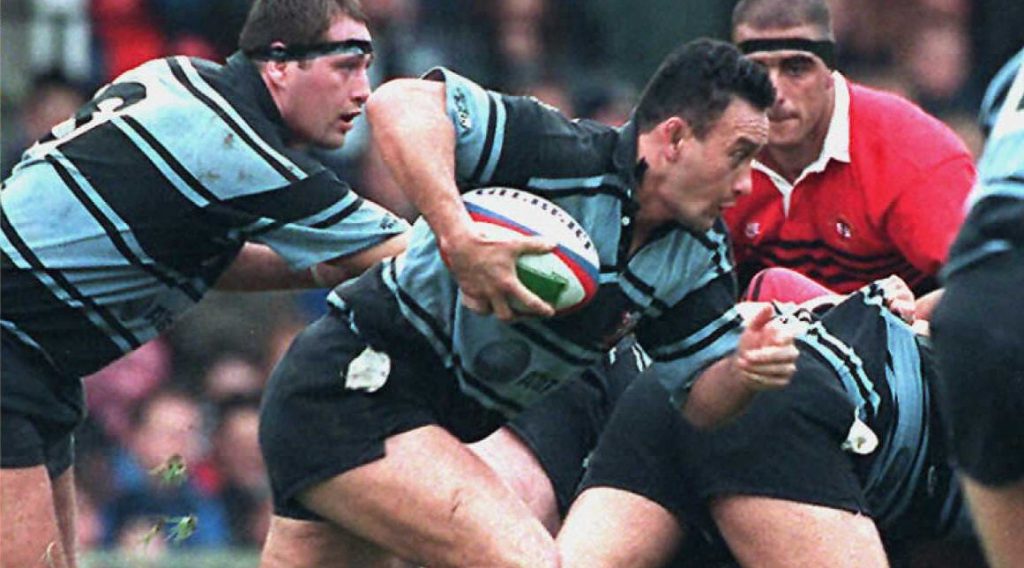 It’s fair to say that Ireland’s Dave McHugh hasn’t been on Andrew Lewis’ Christmas card list ever since he penalised the Cardiff loose head at a ruck in front of the posts in the inaugural Heineken Cup final on Sunday, 7 January 1996.

Come to think to it, McHugh, who was unquestionably one of the top referees in the world at the time, probably wasn’t offered much goodwill by the Cardiff players, coaches or supporters in the immediate aftermath of the historic final in which Stade Toulousain famously triumphed 21-18 after extra time.

The collective sigh from the predominantly Welsh crowd of 21,800 at the old National Ground, Cardiff Arms Park, was loud enough, but the cries of protest from Lewis as he showed the referee the ball he thought had won legally could be heard in the stands.

From 18 metres out at the River Taff end of the famous ground, there was virtually no way that Christophe Deylaud could miss the resultant penalty – even though Mark Ring did his best to put him off.

“My initial reaction was that it wasn’t a penalty. Then we all got angrier as we realised how close it was to the posts,” explained Cardiff scrum half, Andy Moore. “Deylaud had already converted one of their two tries and I couldn’t see any way he was going to miss from so close.

“But Mark Ring had other ideas. ‘It isn’t as easy as it looks – the closer ones are always the harder ones’, he shouted at him. His sledging didn’t make any difference. He kicked it, Toulouse took the title and we were left dreaming of what might have been.

“We were guilty of letting Toulouse play away in the first 15 minutes. They scored two tries and it was as though we were sitting back and applauding them. It wasn’t until after they had scored those two tries that we woke up to the reality of the game and the occasion and started to fight back.”

A repeat of the very first Champions Cup final 🏆

And fight back they did. It was 12-6 to the French side at the break, 15-15 after 80 minutes and then 18-18 as the tournament organisers began to panic about what to do if the game ended in a draw after 110 minutes.

Moore’s half-back partner, Adrian Davies, had a dream day with the boot and kept his side in touch with six penalties. If only there could have been one more.

“To be fair, had that Toulouse side swapped shirts and come to Cardiff in the Five Nations a few weeks later as Les Bleus nobody could have complained. They were a fantastic side and we just gave them a little bit too much respect,” added Moore.

“That Cardiff team was difficult to get into there was so much strength in depth. And once you got picked you had to play at your very best to stay there.

“I had to battle with Andy Booth to get into the No 9 jersey and when you look at the players on our bench on that day you can see the strength we had in reserve – Jonathan Davies, Nigel Walker, Andy Booth, Howard Stone, Keith Griffiths, Mike Griffiths and Paul Young.

“We had a great coaching team, led by Alec Evans which included Terry Holmes, Alun Donovan, Charlie Faulkner and Gwyn Griffiths, and there was huge belief in the side.

“It is a real honour to have played in the first final and I can still remember the feeling of pride when we walked into the dressing room. There, on the front page of the official programme was a picture of me . . . kicking with my right foot!

“That was a very rare occurrence for a lefty! My other vivid memory was going up to receive my medal at the end of the game. When I say medal, it was actually a metallic structure that fell apart! I swapped a shirt with my opposite number, Jerome Cazalbou, and I’ve put it into a display with my Cardiff jersey. The programme is in there and the piece of metal is now flattened and in the frame as well. It’s hanging in my office and is a constant reminder of a great occasion, but a chance that went begging.”

Many of the team from that inaugural final will be at the Arms Park on Saturday to see Cardiff host Stade Toulousain yet again. “I’m taking Mike Hall with me to watch the game and the early signs were there could be up to 10 of the old guard going. It’s fantastic that Cardiff are going to fulfil the fixture and it will provide some young players with an incredible opportunity,” added Moore.