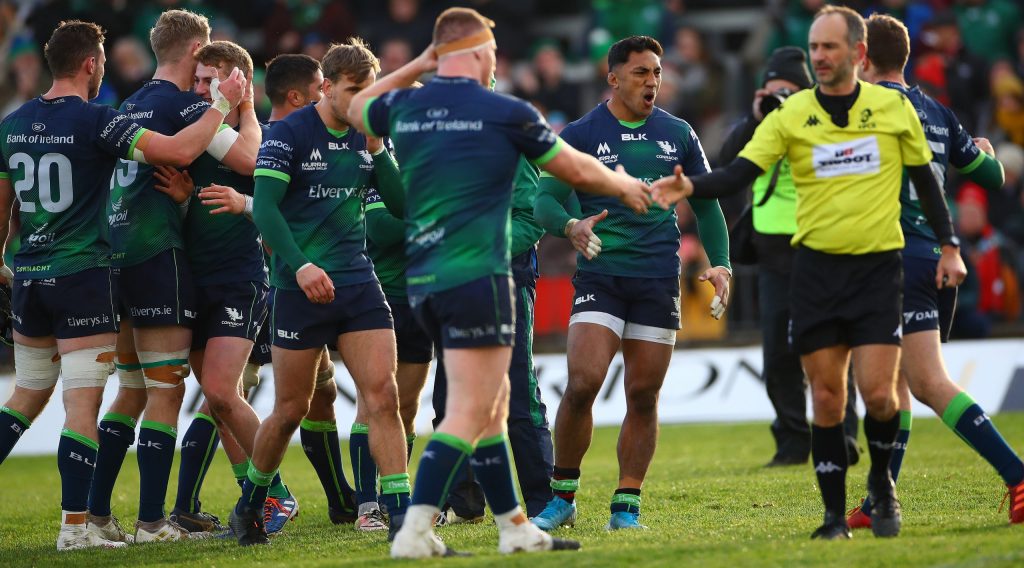 Mack Hansen scored two tries as Connacht Rugby eased to a 36-11 win over Ulster Rugby in the United Rugby Championship on Saturday.

Australian winger Hansen joined Connacht this summer and could make his Heineken Champions Cup debut when the Irish province get their European campaign under way against Stade Français Paris on December 12.

John Porch and Diarmuid Kilgallen went over midway through the second half before Bradley Roberts grabbed a consolation try for Ulster. But Hansen rounded off a dominant Connacht display as he dotted down on 79 minutes, with Jack Carty converting for the last of his 11 points.

Lloyd Williams and Hallam Amos crossed in the first half before a penalty try on 50 minutes looked to have put Cardiff out of sight, but two Dragons scores reduced the hosts’ winning margin.

Meanwhile, Stephen Myler kicked all of Ospreys’ points as they triumphed 18-10 over Munster Rugby at the Liberty Stadium. Craig Casey went over for the visiting two-time European champions’ only try.

In the Gallagher Premiership, league leaders Leicester Tigers continued their winning start to the season with a 19-11 victory over fellow Heineken Champions Cup side Sale Sharks.

Hanro Liebenberg scored for Tigers and George Ford kicked 14 points, while Curtis Langdon dotted down for a late Sale try.

Andre Esterhuizen and Joe Marchant both grabbed braces for Quins either side of a Marcus Smith score, while Bath’s tries came through Sam Underhill and Will Stuart.

Exeter Chiefs lost ground on the leaders as they suffered a 33-21 defeat at home to EPCR Challenge Cup side London Irish. Will Witty, Stuart Hogg and Jack Nowell were on the scoresheet for the 2020 Heineken Champions Cup winners.

Paolo Garbisi tallied 22 points for the visitors and Cobus Reinach notched a brace, while Racing crossed the whitewash through Max Spring and Juan Imhoff, in addition to a second-half penalty try.

Ramos was on target with every conversion and slotted two penalties to take his match haul to 21 points.

Union Bordeaux-Bègles breezed to a 39-13 victory over USAP – Yann Lesgourgues crossed twice to add to scores from Cyril Cazeaux, Nathanael Hulleu and Matthieu Jalibert before a late penalty try.

First-half tries from Kylan Hamdaoui and Arthur Coville and 13 points from the boot of Joris Segonds helped Stade Français edge past Lyon in a 23-18 success.