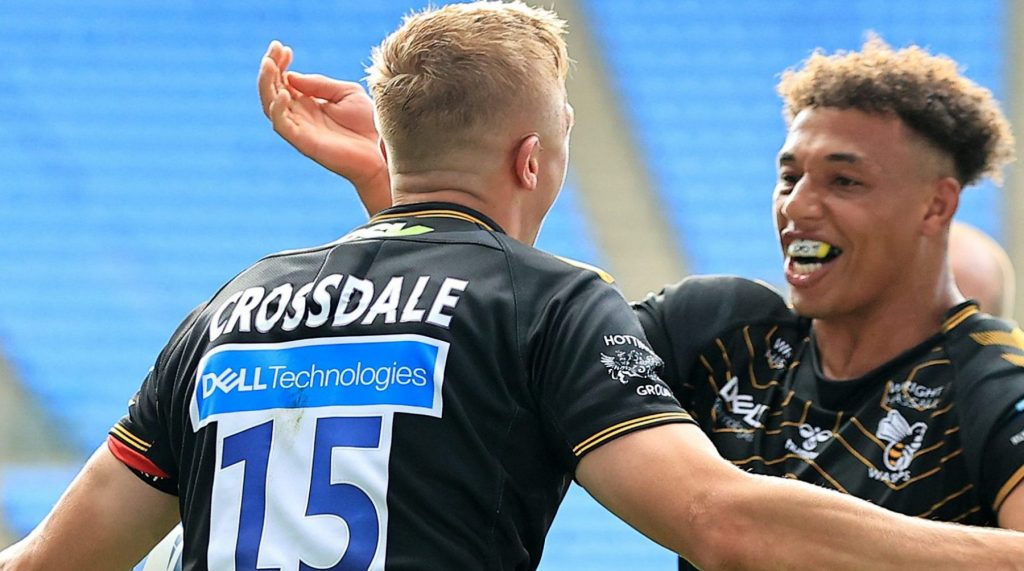 Ali Crossdale scored a brace on debut for Wasps

Wasps, who will be eager to improve on their Round of 16 exit in last season’s European campaign, scored six tries at the Coventry Building Society Arena, debutant Ali Crossdale catching the eye with a first-half brace.

Brad Shields, Dan Frost, Tom Willis and Zach Kibirige added second-half tries in a comprehensive triumph for the hosts, whose only try concession was a first-half effort from Max Lahiff.

Northampton responded to an early 14-0 deficit with tries from Alex Mitchell and Matt Proctor but still trailed 21-17 at the break, Don Armand, Jack Maunder and Rus Tuima dotting down for Exeter.

Three second-half penalties – one from Grayson and two from George Furbank – capped a dramatic comeback, Furbank’s final kick coming with a minute remaining.

Worcester produced a spirited response after trailing 21-3 at the interval – Ollie Lawrence, Willi Heinz, Will Chudley and Marc Thomas all scoring tries.

Bath Rugby fell to a 20-13 reverse at home to Newcastle Falcons. Max Ojomoh chalked up a late consolation try for Bath, after Adam Radwan, Iwan Stephens and George McGuigan had touched down for the Falcons in the first period.

As we continue our previews of each #HeinekenChampionsCup side this season, we come to the 2020 champs 👊

What are you expecting from Rob Baxter's men in this campaign?https://t.co/oGgQPUfm3g

Gavin Coombes and Simon Zebo both notched doubles in Munster Rugby’s 42-17 victory over Sharks at Thomond Park as the Irish province crossed the whitewash six times. Craig Casey and Chris Cloete were the two-time European champions’ other try-scorers.

Scarlets fell to a 26-22 defeat at Edinburgh Rugby, Steffan Evans, Kieran Hardy and Johnny McNicholl touching down for the Welsh region in reply to two tries from Darcy Graham plus one apiece from Ben Vellacott, Blair Kinghorn and Mark Bennett.

James Kerr-Barlow scored a first-half hat-trick, while Eneriko Buliruarua (2), Jules Favre, Guram Papidze and Rémi Picquette also touched down for the hosts, who were also awarded a penalty try.

Union Bordeaux-Bègles overcame a 10-9 half-time deficit to defeat CA Brive 29-10. Ben Lam was the star of the show with a second-half double within five second-half minutes after Federico Mori’s opener. Matthieu Jalibert kicked four penalties and a conversion.

Racing 92’s first-half display was just enough to hold off Lyon in a 24-20 victory as first-half tries from Gaël Fickou, Camille Chat and Ibrahim Diallo opened up a 21-0 lead at the break for the three-time Heineken Champions Cup runners-up.

Lyon rallied with tries from Temo Mayanavanua and Baptiste Couilloud, but Racing had just enough in hand to claim the spoils.

Montpellier Hérault Rugby suffered a second straight defeat in a 23-22 reverse at Section Paloise. Marco Tauleigne scored two tries and Pierre Lucas and Arthur Vincent one apiece – but it was the hosts who triumphed thanks to two tries in the final ten minutes from Youri Delhommel and Aminiasi Tuimaba.