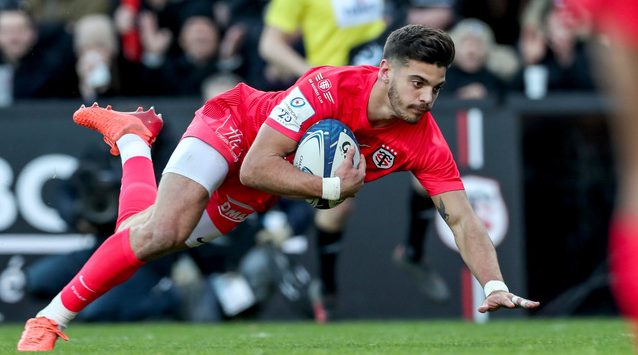 Stade Toulousain fly-half Romain Ntamack yet again proved his worth to the Heineken Champions Cup holders as he scored a late try to defeat Stade Rocheais 20-16 in a repeat of last season’s European decider.

The 22-year-old crossed the whitewash with under 15 minutes left to play to put Toulouse back in front after a first half dominated by La Rochelle, who led after Jules Favre scored La Rochelle’s sole try in the opening period.

That try was converted by Jules Plisson who also added a penalty kick, whilst a trio of three-pointers from Toulouse full-back Thomas Ramos gave La Rochelle the lead by a solitary point at the break.

Plisson helped La Rochelle into a seven-point lead with two further successful kicks from the tee, but the match then swung when Australian lock Will Skelton was shown a red card after a shoulder charge on his compatriot Rory Arnold just before the hour-mark.

That altered the momentum of the match, with Ntamack exposing the space to score the match-winning try in between a pair of Ramos penalty kicks, meaning Toulouse would again deny their French rivals, this time by four points.

Back in the #HeinekenChampionsCup this season, @CastresRugby made a winning start to their Top 14 campaign 🙌

Benjamín Urdapilleta was the star of the show as he tallied 10 points to help edge out Section Paloise 16-12 in the opening round 🌟https://t.co/aLTkLHkBeU

Their previous two meetings both also went the way of the five-time European champions, with their TOP 14 final finishing 18-8 in Paris and their Heineken Champions Cup showdown ending 22-17, with Levani Botia of La Rochelle being shown red in that clash.

Elsewhere on Sunday, scrum-half Morgan Parra set a TOP 14 record for most consecutive successful kicks at goal, but it was not enough as Lyon secured a 28-19 win over his ASM Clermont Auvergne side.

Parra converted JJ Hanrahan’s try and kicked four penalties to take his streak to 42, bettering the previous best of 41 set by Brock James in the 2008/09 season.