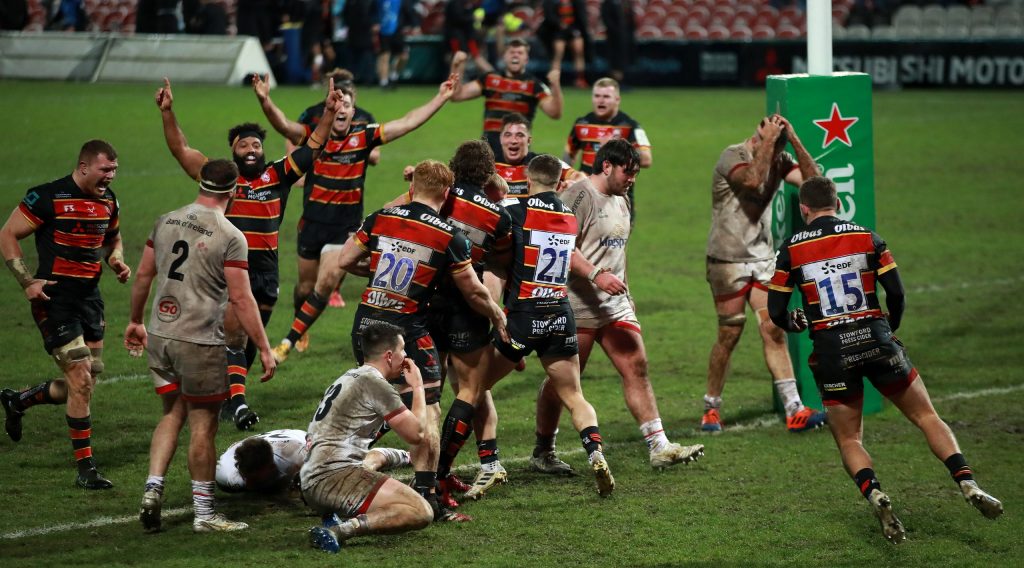 A dramatic late comeback in round two of this season’s Heineken Champions Cup is the latest enthralling matchup to feature in our Matches of the Season feature, as Gloucester Rugby and Ulster Rugby played out a nine-try thriller at Kingsholm.

After defeats for both in the opening round of fixtures, victory was vital for both clubs to set up progression to the knockout stages of the competition.

A breathtaking last-gasp try from Gloucester replacement George Barton gave the Gallagher Premiership side a sensational come-from-behind victory against Ulster.

The 85th minute score capped a dramatic late comeback as the English outfit trailed 34-24 with six minutes remaining in the contest.

Welsh wing Louis Rees-Zammit opened the scoring with six minutes played as a sweeping Gloucester move opened up the left flank for the winger after a bursting run from full-back Kyle Moyle opened the Ulster defence – Rees-Zammit touching down in the corner.

The Irish province replied five minutes later when Billy Burns waltzed in untouched from close range, capitalising on a breakdown in communication from the Gloucester defensive line.

A 25th minute sin-bin for Rob Herring allowed the hosts to extend the lead to 17-7 – a penalty try awarded as the powerful Gloucester maul proved too much for Ulster. The try resulted in a second sin-bin for the visitors, Alan O’Connor sent to the sidelines.

17-10 at the break, Gloucester produced another unstoppable maul in the opening salvos of the second period – Mark Atkinson getting the dot down in the corner converted by Lloyd Evans.

Ulster reduced arrears on 52 minutes when scrum-half John Cooney bounced off a series of tackles before offloading to Michael Lowry who had the simple task of crossing the whitewash unabated.

Moments later Rees-Zammit was sent to the sin-bin for Gloucester for an intentional knock-on – a decision that resulted in a penalty try for the Irish province. A Cooney penalty gave Ulster their first lead of the contest, 27-24.

An opportunistic try from Cooney – who totalled 15 points in defeat – saw him scamper half the length of the field after picking up a loose ball to open the lead to 34-24 with 12 minutes remaining.

A second penalty try for Gloucester with six minutes to play set up a dramatic finale as the English outfit pushed for an unlikely victory in the circumstances.

In the fifth minute of added time, Barton became broke Ulster hearts as he scored from close range to cap a scintillating late comeback which will live long in the memory.