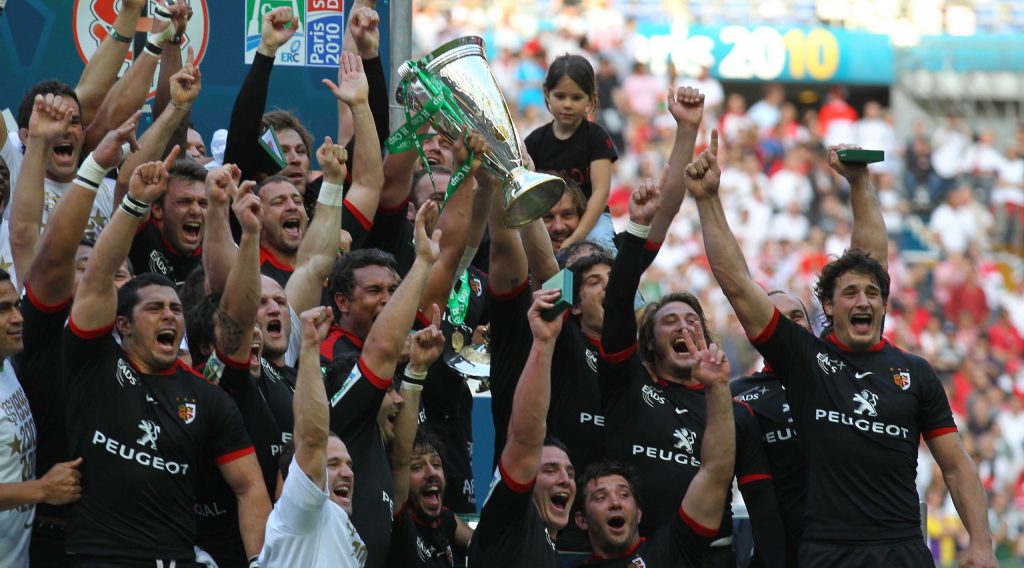 Toulouse lift the European Cup in 2010

As Toulouse approach their seventh European Cup final with their May 22 date against La Rochelle in the Heineken Champions Cup decider at Twickenham, we look back at the four where they lifted the prestigious trophy.

Toulouse won the inaugural European Cup in dramatic fashion as they pipped Cardiff at Cardiff Arms Park with a last-gasp, extra-time penalty from Christophe Deylaud.

The French side scored the only tries of the final through Thomas Castaignède, who also dropped a goal, and Jérôme Cazalbou. Both came in the first 10 minutes, with Deylaud converting one.

However, Adrian Davies kept Cardiff in touch with six penalties, his fifth in injury time levelling the scores at 15-15 and forcing the additional period, only for Deylaud to seal the trophy with his second penalty.

Toulouse made it two wins from two European Cup deciders with another hard-fought victory as they held off a fierce Perpignan fightback in Dublin in the first final between two French clubs.

Toulouse capitalised on having a strong wind behind them to establish a 19-0 interval lead, with Yann Delaigue kicking four penalties and converting their only try – from wing Vincent Clerc.

The boot was on the other foot in the second half, though, with Manny Edmonds landing four penalties to reduce the arrears to 19-12. However, Delaigue’s injury-time penalty clinched victory and rendered Pascal Bomati’s late try redundant.

Toulouse became the first three-time winners of the European Cup with their second extra-time success in four finals, at Edinburgh’s Murrayfield Stadium.

Frédéric Michalak was their hero, as he first forced extra time with a 78th-minute penalty and then wrapped up victory with a penalty and a drop-goal.

Earlier, David Skrela had landed four penalties from five attempts to give Stade a 12-6 interval lead, with Jean-Baptiste Elissalde replying with three penalties, before Michalak took over the goal-kicking duties.

Toulouse increased their record tally of European Cup triumphs to four by emerging victors in their third all-French final, this time at the Stade de France in Paris.

Biarritz made the early running, with three penalties from Dimitri Yachvili to one from Florian Fritz giving them a 9-3 advantage, but Toulouse hit back to lead 12-9 at the break thanks to a Fritz drop-goal and two David Skrela penalties.

Yachvili levelled matters with his fourth penalty from four attempts, but Toulouse made fresh history with two drop-goals and a further penalty from Skrela, despite a late Karmichael Hunt try converted by Valentin Courrent.