Our fab five Heineken Champions Cup Legends at No.8 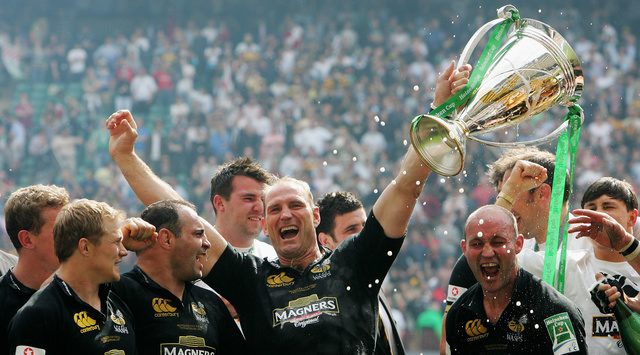 Dallaglio celebrates after the Heineken Cup success in 2007

Our Heineken Champions Cup Legends focus hits the final position today as we look at five marvellous No.8s who have made a huge impact on the tournament since its inception in 1995.

Dallaglio captained Wasps to both their Heineken Cup successes, in 2004 and 2007, his power from the back of the scrum enabling the English club to enjoy a purple patch at the top of the European game. A one-club player, he made 53 of his 61 European appearances in the elite tournament and scored eight tries.

The esteem in which Foley is held following his tragically early death in 2016 is evident in the fact that the EPCR European Player of the Year receives the Anthony Foley Trophy. He marked his first season as Munster captain by guiding them to their first Heineken Cup in 2006. After making his European debut in 2005, he was a fixture in the Munster back row for the next 12 seasons and scored an amazing 23 tries.

Harinordoquy has no shortage of European pedigree, having spent 16 seasons playing 74 games across both competitions, with 12 of those in the top flight. However, he never quite managed to capture the top prize, finishing runner-up with Biarritz in 2006 and 2010 after narrow losses to Munster and Toulouse respectively.

A member of the Leinster side who claimed three Heineken Cup titles in four seasons, Heaslip was a key cog in a team who dominated the tournament in 2008/09, 2010/11 and 2011/12. A model of consistency, he played in every match in the first and last of those campaigns, and missed just two matches in the other as he amassed 85 European Cup appearances.

Winner of the Heineken Man of the Match in Saracens’ 2017 European Cup final win over ASM Clermont Auvergne and again in their 2019 Heineken Champions Cup semi-final win over Munster, the three-time European champion has already quite an impression on the competition, despite making just 46 appearances to date. His nine tries have typified his power.