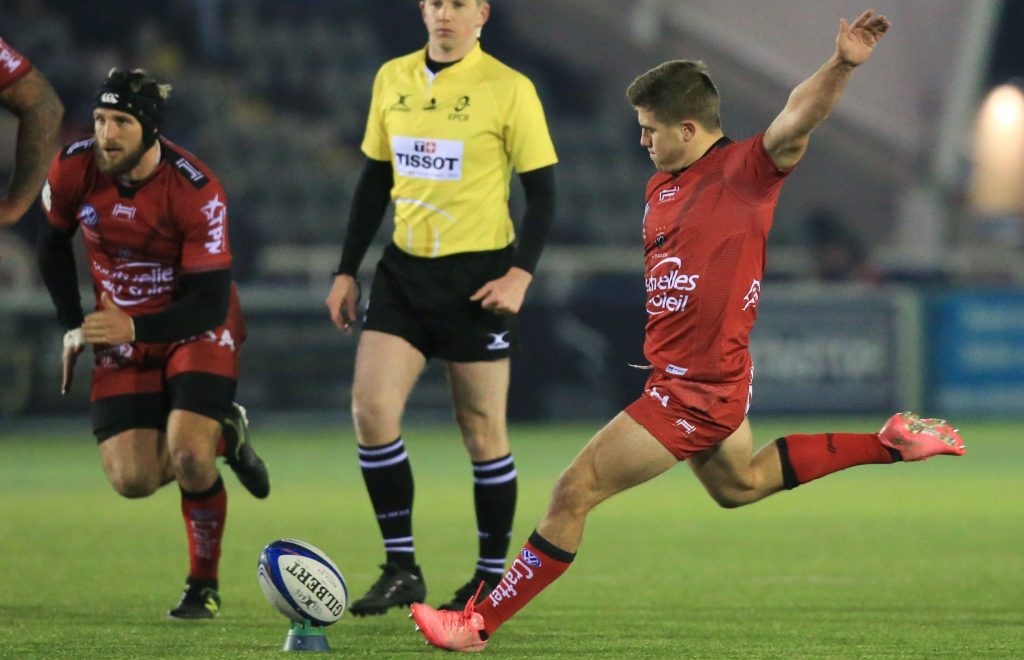 Louis Carbonel in action for Toulon in the Heineken Champions Cup

The 21-year-old fly half slotted a penalty and converted tries from Swan Rebbadj and Baptiste Serin as visitors Toulon took control of the game in the early stages.

However, Wenceslas Lauret and Teddy Thomas both scored for Racing in a four-minute blitz late in the first half, and with Maxime Machenaud adding both conversions to his early penalty, the scores were locked at 20-20 heading into the break.

Machenaud would then give Racing the lead just over five minutes into the second half as he kicked another penalty, only for Carbonel to respond with his own effort from the tee moments later.

Carbonel went on to notch two further penalties without reply from Racing across the remainder of the half, sealing an important away win for Toulon at the La Defense Arena.

Meanwhile Anthony Bouthier kicked 14 points for Montpellier but was unable to prevent a narrow defeat to Challenge Cup side Castres Olympique at the GGL Stadium.

A Julien Dumora try gave Castres the advantage with just over ten minutes played, but home side Montpellier responded through a Henry Immelman score.

Fly-half Bouthier exchanged penalties with Castres counterpart Benjamín Urdapilleta throughout a first half that ended with Montpellier 16-11 ahead.

Bouthier extended the advantage to eight points early in the second half – a lead Montpellier would hold heading into the final quarter of an hour.

But Urdapilleta would move the visitors to within striking distance as he nudged another kick through the Montpellier posts, before the Argentine sealed the victory as he converted a Maama Vaipulu score with eight minutes to play.

Toulon’s victory leaves them four points off third-placed Racing in the TOP 14 Table, while defeat for Montpellier means they sit second-bottom with just three wins from 13 games.