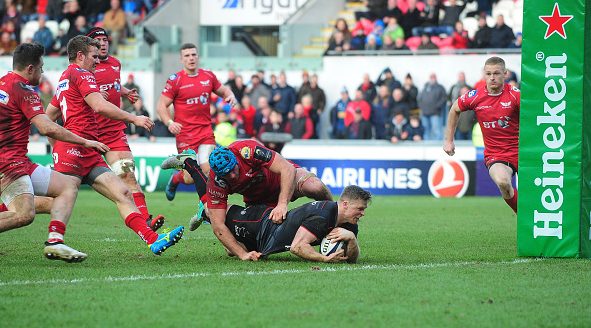 Heineken Champions Cup leading try-scorer Chris Ashton scored a dramatic late try for European champions Saracens to earn a draw against Scarlets in their Pool 3 matchup on this day four years ago.

Scarlets’ hopes of a quarter-final berth were on the line in the encounter at the Parc y Scarlets in Llanelli – only a victory would have kept their competition hopes alive.

Saracens, meanwhile, were chasing a record 14th successive victory in the competition and were almost assured of a final eight appearance for the sixth season in a row.

Three penalties from the boot of Scarlets’ fly-half Dan Jones had the hosts leading at the interval. Wing Nathan Earle touched down in response for the visiting English side as the Welsh region led 9-5 after the opening 40 minutes.

A further Jones penalty extended the lead for Scarlets early in the second period before Ashton took a fabulous offload from Alex Lozowski to breach the defence for the game-levelling try.

Centre Scott Williams restored the Welsh side’s lead after scrum-half Aled Davies picked out his run under the posts with a precise pass.

Penalties were exchanged in the final 10 minutes, with the visitors also reduced to 14 men as Will Skelton was sent to the sin bin. Scarlets lead 22-15 heading into the final seconds of the game.

Owen Farrell – in added time – produced an exquisite dummy to deceive the Scarlets’ defensive line before offloading to Ashton who finished the move off under the posts. Farrell kicked the conversion to earn the last-gasp draw.